'Not Without a Fight', a True Story About a Jewish Resistance Fighter in WWII Poland 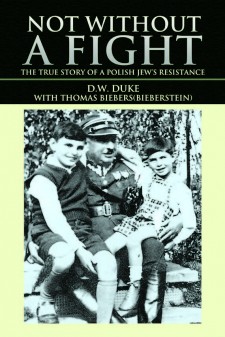 LOS ANGELES, December 17, 2017 (Newswire.com) - It is Sept. 1, 1939 when Germany invades Poland and transforms eight-year-old Casimir Bieberstein's world forever. The son of a wealthy Jewish businessman, Cass happily lives in a thirty-room mansion. But when his family is forcibly ejected from their opulent and luxurious existence, Cass is immersed in a dark life he never could have envisioned in his wildest dreams.

After moving from one apartment to the next, Cass and his family are eventually forced into the Jewish ghetto in Warsaw nearly three years later. Cass, who is seeking justice and the neutralization of Arturo, responds in the only way he knows and becomes a sniper for the Jewish Resistance. As battles lead him to fight in the 1943 and 1944 uprisings as well as with the Soviet Army when they finally drive Germany out of Poland, Cass ultimately turns the tables on his oppressors and becomes a shining example of the inner-strength and determination of the Jewish people to never give up, no matter what.

"'Not Without A Fight' shares the true story of a Polish Jew's journey to become a Resistance Fighter intent on seeking justice for wrongs while attempting to survive the atrocities of the Holocaust." - Excerpt from back cover of "Not Without a Fight"

Kirkus Reviews: "The extraordinary wealth of narrative details and their historical authenticity are both luminous testaments to the rigor of Duke's research. A stirring story of survival against a beastly adversary."

Source: Not Without a Fight

D.W. Duke - Attorney, Holocaust Historian and Author of 'Not Without a Fight, A Polish Jew's Resistance' - Warns of Dangers of Political Polarization in America
Holocaust historian and author warns that the intense political polarization in America is similar to conditions in Germany before World War II and may lead to an unstable government and the rise of demagoguery.
Not Without a Fight - Dec 31, 2017