NC Haunted House billboards called to be taken down by some due to criticism of promoting certain imagery.

ARCHDALE, N.C., October 2, 2017 (Newswire.com) - After much controversy regarding the content of the Kersey Valley Spookywoods billboards, Fairway Outdoor, who owns the billboards, has made the decision to take down the billboards immediately due to the feedback from drivers.

Kersey Valley Spookywoods put up billboards across the NC Triad Region to promote its haunted house. The billboards depict a photo of a young woman with fake blood and barbed wire around her face. Some are saying the photo portrays child abuse and domestic violence. Some are even arguing that it promotes sex trafficking.

The design was also approved by Fairway Outdoor Advertising before it went up on their billboards. A representative from the company said there aren’t any sort of regulations when it comes to content. They view it as freedom of speech; however, they can deny a design if they feel that it’s necessary.

Spooky Woods supporters say it’s fitting for Halloween time, and it is clearly a billboard for a Haunted House. The girl underneath this costume is Sydney Parks, a Kersey Valley Employee. Her character is a product of the Spookywoods Lab, run by Matt Patterson.

“Just to assure everyone, I’m 21,” Sydney said. “I’m not being abused or you know, forced to do anything.”  Patterson says the barbed wire around her face is plastic and that the rest is simply makeup.

It’s a fictional character and the folks at Spookywoods say it’s just the nature of the business. “She’s not a victim, she’s a protagonist in the show,” Patterson explained. “If you look at the way the makeup is done, she’s snarling her face, she’s in attack mode.”

He also said they put it on the public to pick the image on the billboard. Their social media following voted on the image they went with.

North Carolina residents are encouraged to make up their own mind when it comes to the advertising of Kersey Valley Spookywoods this Halloween. To learn more visit http://spookywoods.com. 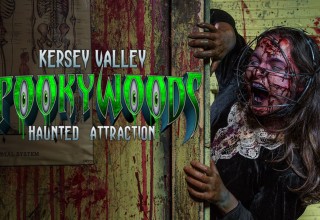