Breaks gender ceiling in company and nationally in construction industry 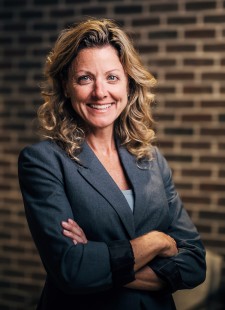 Wade joined the company in 2009 as the director of marketing, moving up to its director of sales and marketing and then to vice president of strategy before being named the executive vice president. She brings over 20 years of sales, marketing and business strategy experience to North American Roofing. Her other experience includes advertising and strategic account development in Illinois, Pennsylvania, Florida and North Carolina.

Kelly is a born leader and has created a culture unique to roofing and in line with some of the most diverse and progressive companies in the U.S. It's a culture of inclusion, team idea development, accountability and work-life balance that comes naturally to her.

Brian Verble, former CEO and current president and vice chair of board

“Kelly is a born leader and has created a culture unique to roofing and in line with some of the most diverse and progressive companies in the U.S.,” said Brian Verble, the former CEO and current president and vice chair of the board who will transition to chairman of the board. “It’s a culture of inclusion, team idea development, accountability and work-life balance that comes naturally to her.”

During Wade’s tenure as chief operating officer, she created a standard process-oriented and data-driven culture across all departments by investing heavily in technology and training. Wade also expanded service offerings nationally, established a solid leadership team, implemented customer-first programs, grew the large-scale national customer base and relocated the company headquarters from North Carolina to Tampa, Florida.

“Beyond surpassing the financial and strategic goals of the company, Kelly has proven to have the character and intrinsic qualities the Board wants in its leader,” said Mike Verble, the board chairman. “Most of all, Kelly is fully committed to making North American Roofing the greatest and most profitable company it can be.”

In her new role, Wade will continue to be responsible for the overall operations and financial performance of the company. She will also maintain and grow all banking, insurance, strategic partner, and overall high-level business relationships.

“I'm grateful for the 8-year journey I've had at North American Roofing and to the amazing group of people I'm so blessed to work with every day,” said Wade. “I'm committed to leading the team in executing the vision and goals of the board and to continue to build upon our rich 38-year history. The future is beyond exciting for North American Roofing.”

According to Fortune Magazine’s 2017 Fortune 500 and Fortune 1000 lists, which ranks major U.S. companies by their fiscal 2016 revenues, a mere 32 of Fortune 500 companies were run by women and only 35 of Fortune 1000 companies had women at the helm. In the roofing industry, where North American Roofing ranks No. 6 in revenues and employs about 500 people nationwide, it’s nearly nonexistent at less than 1 percent.

“I’m proud to be added to the number of women leading companies in the U.S., and in the construction industry especially,” said Wade. “I truly hope it inspires other women and young girls to be independent and confident because that would mean more to me. My parents taught me to work harder than the next person – regardless of gender.”

Sarasota Development Firm Under Contract for Mira Mar Building on Palm Avenue
New owner plans to rebuild and bring property up to code and back to life
One Eight Oh PR - Jun 13, 2022