Nonprofit is raising money for 9/11 First Responder programs and with a $25 donation, will put donors on a Times Square Billboard showing these heroes "America Hasn't Forgotten." They send you a picture of the Billboard when the donor is on it. To learn more visit www.charitysharetimessquare.org/sep11 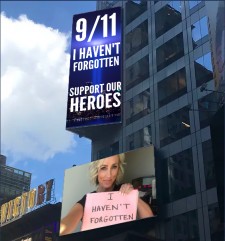 NEW YORK, September 6, 2019 (Newswire.com) - The nonprofit, Charity Share Times Square, is doing something very unique this September to raise money for, and honor, the First Responders of 9/11, and they are looking to all of America to help them. When they do, they will be on a Billboard in the heart of Times Square, New York.

For a donation of $25, they have the ability to upload a photo that will be displayed on iconic billboards in Times Square throughout September. The donors are asked to hold up signs reading “I Haven't Forgotten” in their photos. They can also post a picture of someone they know who was affected by 9/11 or a hero in their own life that you’d like to honor. Proceeds go to organizations and charities dedicated to helping First Responders and their families.

Once the photo is displayed in Times Square, they will be sent a picture of their photo live on the Billboard. These images will be shared over social media with the hashtags: #neverforget and #IHaventForgotten along with the URL www.CharityShareTimesSquare.org/sep11 to create a viral trend that sweeps across America, inspiring more people to support New York City’s bravest men and women.

“This is one of the coolest fund-raising campaigns we’ve ever been a part of!” says organizer Andrew Marionakis. “This campaign is an incredible grassroots effort to let everyday citizens do their part to contribute to the ongoing struggles that these heroes are still facing 18 years later. Our goal is to get over 10,000 people to appear on these Billboards throughout the month of September.  The money, awareness and support we will be able to generate from this will truly make an impact in a lot of First Responders’ lives.”

“You don’t have to be a New Yorker or even an American to show your support to the heroes of 9/11,” says TJ Allan, partner at Charity Share Times Square. “Jon Stewart showed us the U.S. Government hasn’t done enough to take care of our heroic First Responders and their families, so we wanted to give everyday citizens the chance to help and contribute in a once-in-a-lifetime way. By being on a Times Square Billboard!”

To show your patriotism and support our 9/11 heroes, visit www.charitysharetimessquare.org/sep11 to be part of a great cause and be on a Times Square Billboard all at the same time.  The process takes five minutes and pictures will be sent to donors after they are displayed on the Billboards during September.