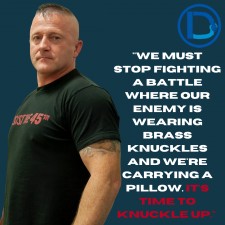 LOGAN, W.Va., June 25, 2020 (Newswire.com) - No Dem Left Behind proudly announces Richard Ojeda as the coalition’s national spokesperson. The appointment builds on the coalition’s mission to support and amplify the voices of Democrats running for Federal office in deeply red and rural districts.

“I am honored to have the opportunity to work with an organization dedicated to supporting candidates like me. I have worked tremendously hard fighting for my district, so I know how hard each of these candidates are working to advocate for their communities. The coalition is poised to build on the tremendous momentum that they created this past year, and I look forward to being part of their efforts to send these fine candidates to Washington.” - Richard Ojeda.

After serving 24 years in the U.S. Army, with two Bronze Star Medals to his name, Major Ojeda served in the West Virginia Senate where he staunchly showed his support for teachers, labor unions and the legalization of marijuana. He even overcame a brutal attack and won his race. In office, he called for increased teacher wages and sponsored the West Virginia Medical Cannabis Act, which was signed into law in 2017. Ojeda has gone on to raise over $3 million dollars as a Democrat in rural West Virginia.

No Dem Left Behind believes that all of its candidates are in a position to follow in Ojeda’s footsteps. By working together, its candidates have raised the profiles of each of their communities and have grabbed the attention that they deserve. The Executive Director of No Dem Left Behind, Hassan Martini, says, “I’m really excited about working with Richard. He knows how to win as a Democrat in rural America, and he brings with him an infectious energy that will help all of our congressional candidates. Together, we will have a major impact on the 2020 election.”

Ojeda’s hiring comes as the coalition implements a plan of strategic growth. No Dem Left Behind plans on adding six additional candidates leading up to the general election on Nov. 3, 2020. No Dem Left Behind’s astounding accomplishments include the registration of an unprecedented number of voters across 10 states. Representing 12 congressional campaigns, No Dem Left Behind is the second-largest Democratic coalition in the United States. This one-of-a-kind grassroots movement is dedicated to electing democrats from deep red districts to Congress. The coalition’s goal is to bring the party together in new ways, focus on districts that are too often overlooked, bring candidates together from across the nation and stand up for what matters most.

Source: No Dem Left Behind