NJ's Knee is on the Neck of Black History, Choking Out the Legacy of MLK

70 years ago today in Maple Shade, NJ, MLK had his first sit in, 70 years later NJ officials still refuse him service or respect. 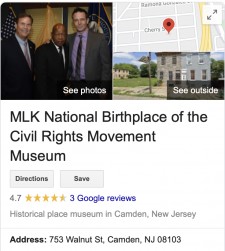 70 years ago today MLK Jr. was refused service at a restaurant in NJ during his first recorded protest against discrimination, a protest that top NJ officials have firmly placed their knee upon to choke out the truth of the racist history of NJ.

With protests raging around the United States triggered once again by consequences from America’s festering institutional racism, one of the most malicious instances of that systemic infirmity is occurring in New Jersey, receiving scant attention nationally.

That sit-in occurred at a café where the white owner pulled a gun on King and his three companions. That violent encounter on the evening of June 12, 1950, where the owner fired his gun, led King to file his first lawsuit against racism – an action against the café owner who refused to serve King.

Despite the wide acceptance that a significant ‘First’ usually merits the designation of historic, authorities in the New Jersey State Historic Preservation Office assert that King’s first protest and his first lawsuit hold “minimal” historic importance.

Preservation authorities advanced that absurd assertion as a shield to justify their denial earlier this year of an application to place the house in Camden, NJ where King plotted that protest on the State Historic Registry. Researcher Patrick Duff, whose examination of King’s Maple Shade protest discovered startlingly new information overlooked by famous historians, filed that registry application five-years ago.

New Jersey preservation authorities also dismissed the assistance King received hours after his first protest from two New Jersey civil rights luminaries who achieved their own ‘Firsts.’ Curiously the dismissal of ‘Firsts’ by King, a seminary student in 1950, comes from a preservation office that has yet to hire its first African American in any operational or supervisory position.

With all of the chants of Black Lives Matter finally being echoed across the planet, it's time for one more chant, "Black History Matters".