Inspired by the September 1968 issue of Playboy magazine 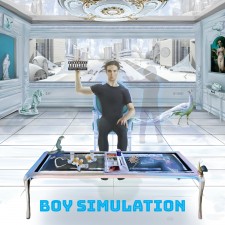 LOS ANGELES, August 30, 2019 (Newswire.com) - 19-year-old hip-hop/rock newcomer Nick Thrice has just released his debut album Boy Simulation. The 10 track effort is a concept project based on the philosophies of Alan Watts, St. Thomas Aquinas, and the late great Stanley Kubrick. From the second the listener presses play, they are thrust into the ecosystem of “The Simulation”, a world that feigns unlimited possibility but ultimately manipulates its subjects into hellish situations as a new pedagogical method. Listen here.

“Boy Simulation,” as Nick puts it, “took a year to conceptualize, and a year to execute.”

In 2017, while studying at an acting conservatory in New Jersey, Nick Thrice was in and out of hospitals for what he would later identify as being “Severe existential dread.”

Then, he came upon the September 1968 issue of Playboy Magazine - which features a Stanley Kubrick interview promoting 2001: A Space Odyssey. The article discusses many things, but it can be distilled down the duality that life is both meaningless and purposeful.

“The most terrifying fact about the universe is not that it is hostile but that it is indifferent; but if we can come to terms with this indifference and accept the challenges of life within the boundaries of death — however mutable man may be able to make them — our existence as a species can have genuine meaning and fulfillment. However vast the darkness, we must supply our own light.”