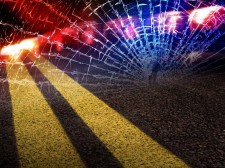 Norton, Virginia, June 2, 2017 (Newswire.com) - Walid Soliman 47,  has been working as a New Reporter in the city of Norton, Virginia for 11 years. He is very outgoing, and has been married to his wife now for 8 years. His wife, Teresa Callen, says “My husband loves his job, and has said he has actually witness quite a bit of arrests. Sometimes I feel he loves his job more than he does me”, she laughed .

Walid Soliman was on call June 1st, 2017 and received a phone call around noon for a hit and run. The accident involved 3 vehicles, but didn’t leave any injured. He packed up his gear and headed out to the scene. Soliman says “I get several calls daily for crime related incidents, but this was this one was a bit different”. This call came from an elderly woman named Patricia Mince. “Patricia Mince called with a unfamiliarized voice, as if she couldn’t believe what just happened happened”, stated Soliman.

"I really wonder why someone would do this? I mean It's better to just man up to your own mistake rather than run away from it, because if you run away and get caught, you are looking at a twice if not worse as a punishment than you would have just stayed at the incident"​
Walid Soliman

When Soliman arrived at the crime, there was debris everywhere on the pavement. There was a Grey Toyota Corolla that was hit in the rear. Apparently upon impact, the Corolla slide back and hit a Brown Volkswagen, which it was parked behind, which didn’t seem to cause a lot of damage, thankfully. The Corolla had a smashed back window, both tail lights were smashed in, and the overall back of the car was totalled. The third vehicle was missing in the action said Soliman. The incident was located in a Wal-Mart shopping plaza. Eye witness says it was a Red Ford Truck. Not even an hour later the man was arrested.

Every once in awhile Soliman will question people's motives. “I really wonder why someone would do this? I mean It’s better to just man up to your own mistake rather than run away from it, because if you run away and get caught, you are looking at a twice if not worse as a punishment than you would have just stayed at the incident”​

Soliman says “This particular crime was one of the weirdest I’ve seen yet. Usually people don’t hit and run with lots of other people around, because of all the eyewitnesses around, but this time was different. It’s like the person just didn’t care?” Circumstances and penalties for leaving the scene of a hit and run can be brutal.

The penalties for felony hit and run can be quite severe. Most states impose fines of between $5,000 and $20,000. And there is very real potential for incarceration as punishment for a felony hit and run. Depending on the nature of the accident and the injuries that resulted, in some states a felony hit and run is punishable by up to 15 years in prison. -legal-encyclopedia