NCFA, located at the Brick Marketplace in Newport, prepares to launch its Spring Exhibition featuring New American Art by emerging and mid-career artists. 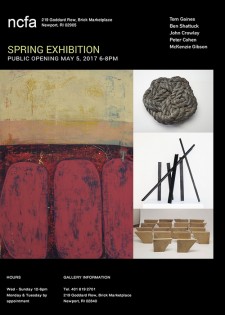 Also featured will be oil paintings from contemporary American oil painter Tom Gaines, with works from “The Rock Series.” <http://www.tomgaines.com> Tom was featured in the design publication Maine Home and Design. <http://mainehomedesign.com/the-canvas/2189-natura-abstraction/>

The painter and sculptor John Crowley will be featuring several paintings and is also creating a very special and whimsical sculpture especially for the show. <http://www.johncrowleyart.com> In addition to creating and making art, John works as the Curator/Exhibition Coordinator for The Mayor’s Office of Arts and Culture at City Hall in Boston.

Peter Cohen is a sculpture artist and works primarily with found and industrial materials such as structural steel. <http://www.peterbradleycohen.com> Peter grew up surrounded by and, in his own words, “devoured by” art. After moving East from Seattle, Peter applied his long history as a former advertising director and contemporary maker to launch an interior and architectural design firm based in Salem, Massachusetts. <https://www.remodelista.com/posts/federal-meets-modern-peter-cohen-home-tour/>

Writer and painter Ben Shattuck, 2016 Gates of the Arctic Artist-in-Residence (Alaska), will be featured. <http://www.benshattuck.com> Ben is the Director of the Cuttyhunk Island Writers’ Residency Studio in Brooklyn, New York. <http://www.cuttyhunkislandresidency.com>

The gallery draws inspiration from diverse artistic styles and media, exhibiting both local and international art that emphasizes art's intrinsic qualities as the basis of understanding — art as both art-object and as artistic endeavor. The gallery's focus on the experiential nature of art takes place through exploration of art's inner-outer-other-worldliness, seen as both found objects or as fully realized expressions of the artist's inner world.

As an emerging gallery, ncfa hopes to become a productive and collaborative partner in the Newport arts environment, both as a launching space for artists and as a driver of economic development for like-minded businesses and organizations.