Newly Launched in the US, Plant-Based Next Meats From Japan Continues Rapid Growth With California Expansion

After a successful U.S. launch on the East Coast and online in December 2021, Next Meats USA, a subsidiary of the new plant-based meats company Next Meats Co., Ltd out of Tokyo, Japan, is debuting in California this week 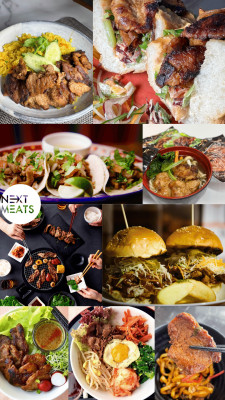 SAN JOSE, Calif., January 27, 2022 (Newswire.com) - Founded in 2017 by entrepreneurs Ryo Shirai and Hideyuki Sasaki to help the world to eat healthier and lessen traditional agriculture's impact on the environment, Next Meats premiered its cutting-edge products, which include the world's first plant-based short rib and skirt steak, in Japan in 2020 after years of research and development.

Japanese specialty market Tokyo Central is the first grocer in California to offer three Next Meats products — Next Short Rib, Next Skirt Steak, and Next Beef Bowl — at six locations in Southern California and the Bay Area, joining retailers in New York, Connecticut, and Massachusetts. Restaurant chefs are also discovering the versatility of Next Meats, which has already debuted at Michelin star Chef Josef Centeno's Tex-Mex Bar Ama in Los Angeles, Ramen Shack in San Juan Capistrano, and J-Spec in New York City, specializing in Japanese A5 wagyu. For the U.S. launch, Next Meats hosted a virtual panel during this year's Consumer Electronics Show and partnered with a number of chefs including Jumoke Jackson (Food Network, ABC, CBS), Food Network Chopped Champion Airis Johnson, Chef Chris Posner of The Seasoned Carte and Keizo Shimamoto, the famed creator of the ramen burger.

Made with non-GMO soy, Next Meats' skirt steak, short rib and beef bowl have been winning over chefs, flexitarians and vegans with their delicious taste and realistic texture. It has also captured the attention of people who have not considered plant-based products before. Next Meats are high in protein and lower in saturated fat than animal meats. They are also free of cholesterol, bleached white sugars and palm oil, with the skirt steak and short rib 100% additive-free. Next Meats' flavors are achieved by natural seasonings that include soy sauce, garlic, salt, sesame oil and bean paste. Versatile enough to be used by home cooks or in restaurants, Next Meats can be used in any cuisine and preparation. Unlike other plant-based meats that typically come ground or crumbled, Next Meats' steak and short rib are sliced, which makes them great for grilling, in addition to sautéing, stir-frying, and more. Next Meats is convenient, easy to use, and available for purchase online, shipping in the Continental U.S. and Canada.

"It's an exciting time for Next Meats to enter the U.S. and Canadian markets, as a fast-growing number of consumers are adopting flexitarian, vegetarian and vegan diets for reasons ranging from proven health benefits to reducing the impact on our shared planet. Next Meats' healthy, plant-based products are a delicious addition to any diet and we are thrilled to begin this journey with our partners at Tokyo Central," said Koki Terui, CEO, Next Meats USA.

Marukai and Tokyo Central grocery stores specialize in Japanese products imported from Japan, including produce, fish, meats, prepared fresh and packaged foods, as well as highly sought-after Japanese home goods. Original Sushi and Japanese Bentos are some of the most popular items at all stores.

As of January 2022, there are nine (Marukai & Tokyo Central) stores throughout Southern California and one store in Cupertino.

"With the expansion of NEXT MEATS into the U..S, it is a great opportunity for us to offer Japanese plant-based meats in our stores, and we look forward to offering them in all of our stores in anticipation of their future market value," said Koichi Toyo, President, Marukai Corporation.