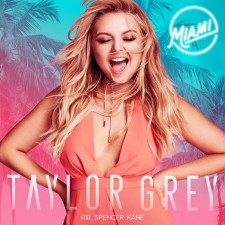 Grey will perform "Miami" on May 19th, as part of the opening celebration of Radio Row at Westwood One Backstage at the 2017 Billboard Music Awards in Las Vegas. "Miami" follows Grey's first single and video, "Never Woulda Letcha," which released February 17, 2017. The release has received well over 1 million plays and continues to rise. "Never Woulda Letcha" has been featured on Radio Disney, KIIS LA, Z100 and dozens of other Top 40 radio stations across the U.S., as well as been in the top 5 for over 4 weeks on What's In Store Music, and continues to create buzz for Grey's promising career.

"Spencer was someone I wanted to collaborate with and was fortunate while touring last year to be able to do so while in Nashville. I love how 'Miami' turned out, it was a great experience recording with him. I'm very excited to release this song as well as perform it live this weekend during the celebration of the Billboard Music Awards," Taylor Grey stated. Kane's magnetic vocals complement Grey's captivating lyrics and voice, allowing a beautiful musical chemistry between the two. "Miami" was produced by Josh Abraham, who was able to capture Taylor's flirtatious personality with the melody and chorus.

Following "Miami," Space Case will makes its debut on Friday, June 16th, and will premiere directly after Taylor hits the road for some summer touring, where she will be joining iTunes charting singer/songwriter Jacob Whitesides for his 'Basically Happy' Tour. This marks Taylor's second tour with Whitesides, whose vast online following has offered him two number one US iTunes songs with "A Piece of Me" and "Faces on Film." For more info on Taylor's run of the 'Basically Happy' tour, please click here.

About GOT PR Agency

GOT PR Agency is a boutique Public Relations agency based in Los Angeles, California.