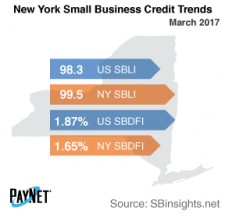 Chicago, IL, May 10, 2017 (Newswire.com) - Data released by PayNet show that ﻿more New York small businesses defaulted on loans and the level of borrowing activity fell in March 2017. The data suggest that economic conditions in the state may significantly weaken.

In spite of an 11 basis point climb from February, New York's PayNet Small Business Default Index (SBDFI) of 1.65% ﻿was still 22 basis points under the national SBDFI level of 1.87%. The uptick in defaults over the past two months may signal deteriorating financial health in the state. Both the New York and national SBDFI climbed 25 basis points year-over-year.

The PayNet Small Business Lending Index (SBLI) for New York was﻿ 99.5, ﻿﻿exceeding the national SBLI level despite ﻿dropping by 1.6% from the previous month's state level. Small business borrowers are being cautious and holding off on new investment.