New Technology in Crib Mattresses Could Eliminate Many SIDS Deaths 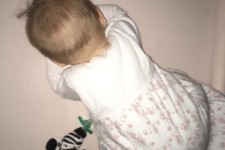 In the recently released AAP infant safe sleep guidelines, the authors make this statement in their technical report:

“Certain crib mattresses have been designed with air-permeable materials to reduce rebreathing of expired gases, in the event that an infant ends up in the prone position during sleep, and these may be preferable to those with air-impermeable materials.”

However, in their policy statement which is the summary of their recommendations from the technical report, they state:

“There is no evidence that special crib mattresses and sleep surfaces that claim to reduce the chance of rebreathing carbon dioxide when the infant is in the prone position reduce the risk of SIDS. However, there is no disadvantage to the use of these mattresses if they meet the safety standards as described previously.”

Are the authors making wishy-washy recommendations?  No, they are just at the mercy of the limitations of our knowledge and scientific data on safe sleep.  Studies exist showing exhaled gases (carbon dioxide) retained on air permeable mattresses is significantly less than measured on fiberfill surfaces.  Therefore, if rebreathing of carbon dioxide gases is thought to be a causal factor in SIDS deaths, why don’t the authors state that the mattresses with “significantly” less exhaled gases reduce SIDS risk?

Because no studies exist comparing infants who sleep on an air permeable mattress versus a fiberfill mattress to see which one has fewer SIDS deaths. These gold standard studies do not exist for any of the AAP Task Force recommendations and likely never will because it is not feasible to enroll the number of infants required to get sufficient data. It’s important to point out that absence of data is not the same as negative findings. While we cannot say with scientific evidence that air permeable mattresses lower the risk of SIDS, we also cannot say that air permeable mattresses do not lower the risk of SIDS.

By their own admission, the authors of the guidelines are hamstrung and unable to make any statements with the strongest level of scientific evidence.  They are able to make some recommendations such as the avoidance of loose sheets and soft bedding, and place infants on their back for sleep, based on studies comparing reports of infants who died to similarly matched infants who did not.

However, even these studies have limitations. Despite this, many parents and safe sleep advocates cling to every word of these well-intentioned physicians who volunteer their time and expertise trying to make some sense of the limited available data.  To some zealous safe sleep advocates, the AAP policy guidelines have become more like biblical text not open for interpretation or consideration.  This was not and cannot be the intended use of these guidelines due to their inherent scientific limitations.

Dr. Margie Andreae, MD, Fellow American Academy of Pediatrics and author of AAP policy statements cautions that policy authors need to be extremely careful not to preferentially select studies that support their views or place more weight on data than exists.  And pediatricians, parents and safe sleep advocates need to realize that the guidelines are just that—guidelines, leaving open the possibility that someday we may find we didn’t get it all right.

So should parents use air permeable crib mattresses to protect their infants from sleep-related death when they roll face down?

The best available answer is infants in the face down position on fiberfill sleep surfaces with a tight-fitting sheet show increased risk of rebreathing of carbon dioxide which leads to hypoxia a condition associated with SIDS, and scientific evidence shows air permeable mattresses provide a “significant” decreased risk of rebreathing of carbon dioxide, so you decide. For those unfamiliar with air permeable mattresses, it’s like asking if your baby is less likely to suffocate with their face pressed into a firm 6-inch-thick pillow (or even a 1-inch plastic encased play yard mat) versus a 1/8 inch thin open weave 3D fabric with nothing but air underneath it.

According to Julie Andreae of Secure Beginnings, “The science of safe sleep continues to advance and we are pleased that we have been able to contribute to the technology that is providing parents with new options for their sleeping infants.  After rigorous testing, our air permeable mattress meets and exceed all the safety standards described in the AAP guidelines and is the preferred crib mattress for any parent concerned about their infant rolling prone.  Over 30,000 infants have slept on the Secure Beginnings products with no reported infant deaths.”

We have revolutionized the crib mattress by making it BREATHABLE.