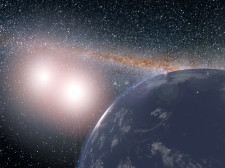 URBANA, Ill., May 11, 2021 (Newswire.com) - Luke Skywalker's view of two suns in Star Wars is fictional, but recent research from the University of Illinois Urbana-Champaign found that five known systems having double-star planets like Tatooine could support life.

"We used data collected by the Kepler spacecraft such as the mass of the stars, how bright the stars are, the location of a giant planet, and other parameters to create a methodology to identify systems with two suns that can host habitable Earth-like planets," said Siegfried Eggl, faculty member in the Department of Aerospace Engineering at the University of Illinois Urbana-Champaign.

Habitability is defined in this research as planets, like Skywalker's home and Earth, that have liquid water somewhere on their surface.

The researchers investigated the effects of double-star and giant planets on habitable zones of nine systems observed by the Kepler mission. They confirmed earlier studies claiming that Kepler-16 and Kepler-1647 host giant planets that make them not suited to host a terrestrial planet within their habitable zones. However, Kepler-34, Kepler-35, Kepler-38, Kepler-64, and Kepler-413 seem much more promising—with Kepler-38 being the best candidate for hosting Earth-like worlds with oceans.

Eggl said the methodology they developed is based on analytical equations rather than computer simulations that have to run day and night for months.

"It's an analytic method that requires almost no computational effort whatsoever," Eggl said. "There are some parts that use numerical models to feed in information, such as the way that the atmosphere interacts to different amounts and spectra of sunlight. That's really difficult to figure out analytically so we used pre-computed atmospheric models for that. The benefit of our approach is that anyone can take our equations and apply them to other systems to determine where to best look for Earth-like worlds."

The Earth's orbit around the Sun is nearly circular, ensuring that the planet receives an almost constant amount of radiation on a permanent basis. But that isn't true for planets that orbit two suns. The second star provides an additional source of radiation and another source of gravitational pull. And even if a planet's orbit is initially circular around the two suns, it will become elliptic over time.

Because of this, Eggl said dynamical stability is a necessary condition for habitability of a two-sun planet, but it is not the only one.

"If a planet comes too close to its suns its oceans could boil away. If the planet is too far out, or even ejected from a system, water on its surface will ultimately freeze, as will the atmosphere itself, like CO2 that forms seasonal polar caps on Mars.

"Once we confirm that a potentially habitable planet is on a stable orbit, we can proceed to investigate how much radiation it receives from the two stars over time. By modeling the evolution of the stars and planetary orbits we can estimate the actual amount or radiation the planet receives."

In Eggl's doctoral dissertation, he developed an analytic framework to determine habitable zones in double-star systems. He said subsequent research and this new work "completes the picture. We know that planets can form in these systems and now we know they can actually retain water on the surface, and it's pretty awesome."

Siegfried Eggl is an affiliate member of NASA's Nexus for Exoplanet System Science, NASA's scientific investigation team for the Double Asteroid Redirection Test mission and is on the research team for the Vera Rubin Observatory, currently being built in Chile.

The study, "Circumbinary Habitable Zones in the Presence of a Giant Planet" written by Nikolaos Georgakarakos, Siegfried Eggl, and Ian Dobbs-Dixon, is published in Frontiers in Astronomy and Space Sciences. DOI: 10.3389/fspas.2021.640830

New Model Accurately Describes COVID-19 Waves and Plateaus
Social activity model shows COVID-19 will be endemic, sticking around like the flu and the common cold
University of Illinois Urbana-Champaign - The Grainger College of Engineering - Dec 14, 2021