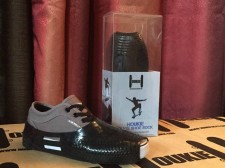 Millville, NJ, June 13, 2016 (Newswire.com) - ​​New Startup HOUKIE Skateboard Shoe Protector announced today that it is raising funds via a rewards / equity crowdfunding campaign on Indiegogo to finish the development of their revolutionary skateboard shoe protector. The company set out to raise $5,000 on Indiegogo to finish development and produce the first batch of their latest invention that is going to change the skate shoe market.

The Houkie is a flexible overshoe that will protect all areas where damage occurs when skateboarding. It is a "one-size fits all" shoe cover. The dynamic stretch bands at the midfoot allows the cover the stretch to fit numerous sizes. The Houkie is stylish, removable and reusable. Hopefully will launch in September 2016!! The actual product will be injection molded rubber and in many different colors.  The initial launch color will be black.  The lightweight HOUKIE only weighs 185 grams!  The product will not be bulky (approx 1/16th of an inch thick) and will allow the skater to keep the "board feel" that is of utmost importance!

Skateboarding has progressed from casually riding on a skateboard to stunts, tricks and maneuvering the skateboard in many ways such as kicks, flips, jumps, spins.....etc. This new maneuvering and riding of the skateboard has been known to cause excessive and severe damage to many areas of the rider's shoes due to the surface that the rider is on, and the manipulation of the skateboard with the rider's feet. On the top of the skateboard is "grip tape" which is essentially sandpaper. This grip tape, when it comes in comes in contact with the skateboarder's shoe during the tricks and maneuvers, adds traction to the shoe in order for the rider to perform the tricks. This grip tape also causes tearing and major wear to several areas of the shoe. The main areas of the shoe that is affected are the outside upper of the shoe, the laces of the shoe, the ball area of the sole as well as the heel and heel area of the sole. In addition, the soles of the rider's shoe is susceptible to wear from the grip tape and the hard surfaces on which the rider is skating on when his is riding and performing these tricks and stunts, for example: concrete, blacktop, hardwood etc. Within a short time, the skateboarder has worn his shoe down so much that he will need to replace the shoe because it is no longer usable or safe to use.

Michael Fransko Sr., the developer of the HOUKIE was a skater back in the early 80’s.  His son, Michael Jr., now 21 years old, has been skating for over 15 years.  Through those years, Michael Sr., has had to purchase skate shoes nearly every two months for his son to wear skating since his shoes were shredded from skateboarding.  An average skate shoe can cost upwards of $80 a pair.  That’s and estimated $320 a year for skate shoes.  Some skaters go through more that this each year.  So Michael Sr. decided to do something about it to save skaters and their parents a ton of money!  Introducing the HOUKIE!

“It’s been a struggle getting the Houkie developed so we can produce a quality product that will save skaters money, but we are almost at the finish line and are very excited about launching the Houkie and saving everyone money!”  says Michael Sr about the past 8 months of developing the Houkie.  “We have contracted with a manufacturer here in the United States and will be proud to say these are Made in the USA!”  “We just need a little help with the extra cost for doing the manufacturing here so we needed to raise some funds to offset the cost.  There is no better way than to offer the Houkie in a crowdfunding campaign so they can pre-order their Houkie at a price less than what it will be when it launches into the retail market.”

Our local tester, Stevie Gandy (photo above) says that he loves the HOUKIE. According to Stevie, he has better board control, can do flick tricks more efficiently and he doesn't even feel the HOUKIE on his shoes because they are so light.

The Houkie is expected to protect skater’s shoes from 4 to 6 month depending on the amount of skating he does daily.  It could even last up to a year.  At a retail price of $34.99, this is a definite money saver for skaters and parents of these skaters.  The HOUKIE Skateboard Shoe Protector is projected it’s release to the retail market through the Houkie web site, Amazon.com and local skate shops in late 2016.  You can find Houkie Skateboard Shoe Protector on Facebook (Facebook.com/houkie), Instagram (houkiesss) and Twitter (@houkiesales) or on the web at http://www.houkieskateshoesock.com

Developer of the Houkie Skateboard Shoe Protector. Looking to get crowdfunding for this new ad revolutionary product.