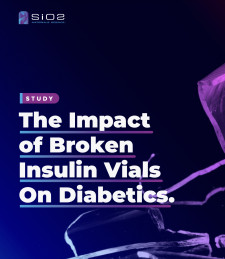 From June 30 to July 8, 2021, 1,000 American adults with Type 2 diabetes who take insulin through a syringe injection were surveyed. The survey was conducted online via PollFish using organic sampling through Random Device Engagement (RDE).

"These findings confirm our belief that despite being widely used, borosilicate glass comes with many drawbacks that directly put patients at risk," said Lawrence Ganti, President at SiO2 Materials Science. "Borosilicate glass isn't just used for insulin, but for thousands of other drugs, which means millions of patients are feeling the same worries, facing the same breakage and loss of medication, and being put at risk on a daily basis — simply because the industry has failed to innovate on a century-old product. It's time for the industry to rethink glass and stop being dependent on a material that hasn't evolved in over 100 years."

To access a full report with an analysis of the key findings, please visit: HERE.

SiO2 Materials Science is an advanced materials science corporation introducing breakthrough disruptive technology serving the biopharma, molecular diagnostic, and consumer healthcare industries. The company is located in Auburn, Alabama. The company has deep partnerships with leading professors at the foremost research universities such as University of California - Santa Barbara, University of Chicago, and MIT. For more information, visit www.sio2ms.com.