The Toothbrush Pillow idea originally to the inventors after watching their daughter struggle with keeping the sink clean and her toothbrush clean during the process of brushing her teeth. After over two years since the originally idea, we have discovered that millions of people may find our product helpful for their normal twice a day habit, brushing teeth! 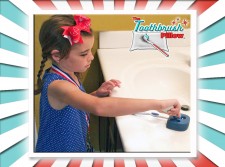 Gilbert, Arizona, May 15, 2016 (Newswire.com) - INDEPENDENCE IS BROUGHT BACK TO THOSE WITH HAND/ARM RESTRITIONS DUE TO PARKINSON’S, ARTHRITIS OR STROKE.

New product launched on Kickstarter provides a sanitary solution and independence with the daily task of brushing teeth.

Thanks to one family, individuals who have struggled with the simple daily task of brushing their teeth, gain their independence back. The difficulty of that ‘twice a day habit’ that everyone ages 1-101 has … brushing your teeth, became a reality when married couple, Lee & Diana Collins, both endured arm injuries during their endurance training.  Diana Collins, co-inventor, said “who would have ever thought that brushing your teeth would be difficult and frustrating on a daily basis.  It took an injury, in which I had no use of my left arm for 4 weeks, to make me realize that there are some people that suffer with this throughout their life.  There had to be an easier way to live and accomplish the ‘simple’ tasks of every day.”  Along with the help from their 3 children, this couple invented the product known as “The Toothbrush Pillow” which provides a simple and inexpensive solution.

“The Toothbrush Pillow” will allow anyone that has not yet developed or no longer has the motor skills to easily and independently brush their teeth.  Most of us that have the fine motor skills and the limbs to brush our teeth take for granted that millions of people don’t.

“Many families like ours, is made up of all ages and abilities,” says Lee Collins, co-inventor, “our parents are getting older, and unfortunately have suffered from strokes, arthritis, and even nerve damage, leaving them feeling more dependent and frustrated.  Our invention will not only help others of similar diagnosis, but it will also help children that haven’t yet developed the fine motor skills, become more independent.”

Statistics of those that would benefit from The Toothbrush Pillow:

1 million Americans live with Parkinson's and another 60,000 are diagnosed each year. (The Parkinson's Disease Foundation)

50,000 new amputations every year in the USA based on information from the National Center of Health Statistics. Currently 350,000 people live with amputations in the USA. (Ishn.com)

Approximately 795,000 people experience a stroke each year in the United States.  Astonishingly, Strokes are the leading cause of serious long term disability. (Strokecenter.org)

The “Toothbrush Pillow” makes brushing sanitary, clean, and easy!  It simply allows one to place the toothbrush down on the counter in a “pillow-like” holder, holding it still while applying toothpaste to it. Then replacing the cap onto the toothpaste, and picking up the toothbrush to brush. “Simple, yet very helpful”, stated Diana Collins.

In addition to showcasing the benefits of “The Toothbrush Pillow”, the Collins’ are very proud to say the product is designed and manufactured in the USA.  For the first time ever, “The Toothbrush Pillow” is available on a crowdfunding website called Kickstarter.com, but only until June 10th, 2016.  Kickstarter allows anyone to help support a product, by becoming a backer.  Backers are people that love what a company is doing, therefore offer a monetary pledge to help inventors take a product to market, with NO RISK.  Backers are only charged for the pledge when the campaign has raised the total goal amount and the project has ended.

Lee Collins concludes, “Supporting and sharing our Kickstarter Campaign, will allow you to be a part of bringing this product to market… and the best part is that it is a USA designed and manufactured product, benefiting so many individuals.

To learn more about “The Toothbrush Pillow” Kickstarter Campaign, visit

or visit www.Kickstarter.com and search: TBP

Check us out on social media at:

The Toothbrush Pillow is designed and will be manufactured in the USA.