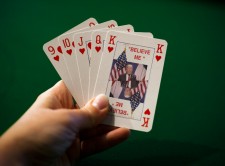 New York City, April 19, 2016 (Newswire.com) - The beginning of a successful career starts with a Vision, Passion, Will and  Perseverance, as we come to learn in Believe me, the unauthorized autobiography of Donald J. Trump, a parody penned by provocative indie author Leagan Kasper. Filled with obvious fictional accounts of his youth, the art of the deal he discovered in kindergarten lending candy to children for interest, Believe me reads as if told by Donald Trump in his own words. Kasper covers everything, including controversies, and doing so presents a Donald Trump who is truthful, compassionate and more savvy about world matters and policies than apparent in his interviews. Trump's secret agenda is clear; he wants to make America great again, and Believe me may well do the trick to help him gain more support from women voters and do just that, make America great again.

While fellow candidates engage in playing poker, trying to bluff their way to the oval office, Donald Trump plays chess in Believe me, humoring his opponents to react and doing so reveal their vulnerabilities to him.

Rocket Sales in First Week of New Book Release "THE TALL TALE"
With her memory perfectly intact, a Bee recalls her evolutionary Journey from species to man, and doing so puts modern day Scientists to shame.
Booklocker - Oct 15, 2015