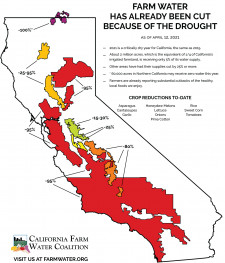 California farms are bearing the brunt of this year's short water supply and have been forced to reduce the acreage of popular California crops, such as asparagus, melons, lettuce, garlic, processing tomatoes, sweet corn. California is the number one producer in the nation of each of these crops.

Conditions are similar to those that occurred in 2015. According to a 2015 drought report issued by UC Davis, ERA Economics, and the UC Agricultural issues Center, water supply cuts led to the fallowing of 540,000 acres of farmland, 21,000 lost jobs, and an economic loss of $2.7 billion.

Critical reservoirs, including Shasta, Oroville, Folsom, Millerton, and San Luis combined have 1.1 million acre-feet less water in storage today than they had at the end of March in 2015, California's last critically dry year. Levels in these reservoirs are currently at 56 percent of average, compared to 72 percent of average at this time in 2015. They are essential to supplying rural communities with drinking water, irrigating farms, supplying water to wildlife refuges, and recharging aquifers in the Sacramento and San Joaquin valleys where a majority of California-grown food products originate.

It is a distressing time for farmers, farmworkers, and businesses that depend on agriculture all across California and illustrates the need to invest in infrastructure that will increase our ability to capture more water during wet years when it is abundant to save for dry years like this. It also puts a strain on consumers who want local, California-grown fresh food choices for their families.