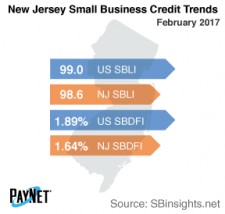 Chicago, IL, April 13, 2017 (Newswire.com) - PayNet, the leading provider of small business credit data and analysis for the commercial and industrial lending industry, reports that in February 2017 the percentage of New Jersey's small businesses defaulting on existing loans has risen. Of the 18 major industries, defaults worsened in 11 and improved in 6 in the state compared to the prior month.

Coming in at 98.6, New Jersey's PayNet Small Business Lending Index (SBLI) fell 0.4% from the previous month's state level, but still performed on par with the national SBLI level of 99.0 this month. The Index is basically unchanged from a year ago.