As Cory Booker campaigns for president, many are asking: have the schools in Newark improved since he was elected mayor in 2006? 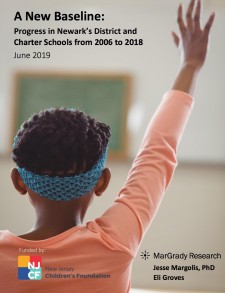 NEWARK, N.J., June 13, 2019 (Newswire.com) - A new report by the New Jersey Children's Foundation, a non-profit organization aimed at promoting a fact-based discussion about public education in Newark, finds Newark’s public schools made substantial progress from 2006 through the final year of state control of Newark’s schools in 2018.

Test scores, graduation rates and student growth rates are all up at both district and charter schools. The share of Black students in Newark attending a school that beat the New Jersey test score proficiency average has more than quadrupled, from 7% in 2006 to 31% in 2018, according to A New Baseline: Progress in Newark’s District and Charter Schools from 2006 to 2018, published today by MarGrady Research and the New Jersey Children’s Foundation.

“We can debate the causes, but we shouldn’t debate the facts: the gains made by Newark children are real, and they are meaningful,” said Jesse Margolis, Ph.D., of MarGrady Research.

This new analysis comes as Newark’s Superintendent, Dr. Roger Leon, prepares to release his first strategic plan for the district today. Dr. Leon’s strategic plan will be the first since the state ended its decades-long era of state control.

“As Newark’s leaders put together the first strategic plan under local control in more than 20 years, we hope this report serves as a baseline for measuring progress,” said Kyle Rosenkrans, CEO of the New Jersey Children’s Foundation.

Other key findings include:

●     Newark’s citywide public school system climbed from the bottom to the top ranks of other high-poverty school districts in New Jersey, ending in the top bracket. Between 2006 and 2018, when compared to other low-income cities and towns in New Jersey, Newark’s citywide average test score rank has improved from the 39th to the 78th percentile in both reading and math.

●     Low-income students in New Jersey (including those in Newark) earned a higher proficiency rate in math and reading than their counterparts in every other PARCC state in 2018.

●     Newark’s charters have shown particularly strong test score gains, and in 2018, as a sector, they beat the state proficiency rate for the first time in both math and reading.

●     More parents are choosing to enroll their children in Newark’s public schools. K-12 enrollment has stabilized in district schools while continuing to grow in charters, and citywide enrollment in 2018 topped 50,000 for the first time in at least two decades.

The report also finds that Newark has more progress to make. Despite citywide gains in both charter and district schools, over 15,000 children in Newark – roughly 30% of the city’s students – still attend low growth, low proficiency schools.

The new report builds upon a report released by MarGrady Research nearly two years ago, by adding the most recently available data to reflect Newark school performance up to the point of last year’s transfer of local control. It also looks at the city’s performance in several new ways--including, disaggregated charter and district school data, providing a national comparison to other high-poverty districts across the country, and analyzing school-level data in Newark.

Along with today’s release of the full report, all of the data is being shared online in an interactive portal, so that Newark’s parents and policymakers can take a closer look at individual schools and important trends. The New Jersey Children’s Foundation plans to update the data and track the next phase of Newark’s educational progress.

About the New Jersey Children’s Foundation:

MarGrady Research helps education leaders make better-informed decisions to improve the lives of students. It does this through rigorous analysis of data, clear and insightful presentation of results, and the development of lasting partnerships with the school districts, foundations and other education organizations it works with. See more at www.margrady.com.