Of Forests and Clocks and Dreams by Takatsu, an unconventional cross-disciplinary postmodern collection of visionary philosophy, literature and art, will be published by Inspiritus Press in Spring 2016, and continue to enlighten thousands of his readers around the globe. 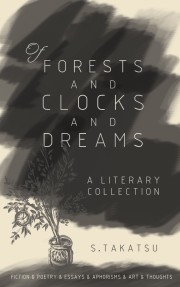 Toronto, Canada, January 8, 2016 (Newswire.com) - ​​​Of Forests and Clocks and Dreams by Takatsu—the multimedia artist and pioneer of English cell phone novels—crystallizes surreal and visionary fragments, moments, imaginings and perceptions in literary short stories, poetry, aphorisms, essay, excerpts, artwork, photography, typography and design. The book will be officially released by Inspiritus Press on April 29th, 2016 as the trailblazing title of a new unconventional organic approach to publishing.

His work explores the nature of reality and the crisis of identity, human consciousness, and imagination stunted by subjectivity, culture, and constructs of a tumultuous simulacrous digital age, and invokes spiritual mysticism and modern metaphysical philosophy in a search for dreams, the soul and beyond. Whether in his enigmatic aphorisms, haiku-esque poetry, or shorts that blur the lines between dream and reality, through strange conversations, umbrellas, a talking bird, grandfather clocks, a transfigured stone, white rice, bookstores, a man with twelve toes, and more, Takatsu continues to open the window of perception and enlighten readers around the globe.

The collection includes short quotes and excerpts of his acclaimed genre-bending dystopian magical realism literary novel, Espresso Love: the unedited manuscript on Wattpad.com that had gained a worldwide readership of over 950,000, winner of a Watty’s Award 2014, ranking #1, and reviewed by professors, editors, authors and fans of all ages. His writing continues to spearhead the university-adult literary fiction and philosophy frontlines on the writing and reading platform of over 40 million unique users per month.

The twenty-five year-old author with 16,000 followers online lives in Toronto and is a musician, guest speaker, panelist, and writing teacher. Takatsu will participate in upcoming events and presentations, sharing about digital literature, multimedia art, cell phone novels, and the new book. Advance and review copies are currently available.

“[His stories] have a timeless quality, little legends or fables that enlighten or explain a philosophy of life, a zen moment… [they] touch on an innate mystery of things that allow one to see.”
- Patricia Keeney, York University Creative Writing Professor, Award-winning Poet, Critic and Author of One Man Dancing

“A thought provoking work that will leave the reader questioning the very existence around them… [Takatsu] always seems to be breaking the rules and combining various mediums of art… The pioneer of English Cell Phone Novels has continued to approach writing—and art as a whole—in different ways, breaking and manipulating constructs… A great glimpse into what the future of the written word—and art as a whole—can be.”
- C. J. Garrett, Author  of  Memoirs  of  a Zygote (Trapped in a Human’s Body)

“Takatsu is a fascinating writer, musician and illustrator and is at the forefront of transmedia storytelling.”
- Rowena Wiseman, Author of Searching for Von Honningsbergs, The Replacement Wife, Bequest, Silver.

“I am awestruck at the philosophical stance of your writing. Your writing is akin to that of Murakami in its surrealist execution.”
- Shane Oltingir, Wattpad Reader

Takatsu, known as a passionate trailblazer of online literature and transmedia storytelling, is an award-winning writer of contemporary literary fiction, featured Wattpad author of 16,000 followers, poet, philosopher, musician and Literature student based in Toronto. In 2008, through Secondhand Memories, Takatsu  pioneered the Japanese “cell phone novel” phenomenon in the English-speaking world, marking a new online literary movement among thousands of young writers and readers globally. The unique serialized fusion of simple haiku-esque poetic technique, visual text flow, multimedia and micro-prose storytelling has re-envisioned technology, youth culture, community and literature. The coming-of-age story, Secondhand Memories, won the Textnovel Reader’s Choice Award in 2009 and was released for fans internationally in 2015 by Sakura Publishing.

Inspiritus Press, spearheaded by a digital generation of experienced forward-thinking artists, is a new innovative, organic and collaborative approach at publishing, media, networking, social media and digital technology, creating an evolving movement, connecting all the arts and creative talent in a grand collective, with no hierarchy and no rules, committed to intellectual, philosophical, visionary, spiritual, experimental, avant-garde, thought-provoking, culture-changing, anti-institutional, unconventional, critically-acclaimed literary, cross-media, multimedia and performance content and happenings.