The 2020 Women of Color in Business: Cross Generational Survey, in Co-Sponsorship With the Executive Leadership Council, involves nearly 2,500 respondents across all generations, including Gen Z, Millennials, Gen X, and Boomers amongst Black, LatinX, Asian and Caucasian women. And for the first time, the research also included White male manager respondents. 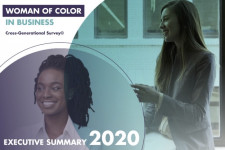 NEW YORK, April 22, 2021 (Newswire.com) - Bonita C. Stewart and Jacqueline Adams, trailblazing business leaders, co-authors, and Harvard Business School alumnae, announced today, with The Executive Leadership Council, the release of their 2020 Women of Color in Business: Cross-Generational Survey©. The new survey is an evolution from their 2019 survey which was included in their book, A BLESSING: Women of Color Teaming Up to Lead, Empower and Thrive, published last fall. Their latest research involved nearly 2,500 respondents across all generations, including Gen Z, Millennials, Gen X, and Boomers amongst Black, LatinX, Asian and Caucasian women. And for the first time, the research also included White male manager respondents.

Although the new survey covers a wide variety of topics, two major new findings involve "generational diversity" and the importance of manager training. "Generational diversity" is a term the co-authors coined to highlight the nuances that are being overlooked in today's Diversity, Equity and Inclusion conversations, specifically, representation across the generations. The 2020 survey found that Gen Z and Millennial female "desk workers," especially those who are Black and LatinX, are supremely confident that they will control their careers. They are mission-driven and tech-forward, with 42% of Black Gen Z respondents saying that they are always the first to know about technological innovations, twice the percentage of women of the other races.

The data has convinced the co-authors that "great managers matter." When asked about mentoring, the female managers of all races were more magnanimous in their willingness to help anyone regardless of race or gender, ranging from 56%-65%. Only 34% of the white male managers concurred. Fifty-one percent preferred to give and 61% preferred to receive advice on the job from other white men because: "I feel I can better identify with them."

To win the race for exceptional talent, leaders and managers must become comfortable with hiring underrepresented minorities in multiples, providing honest feedback and stretch assignments, and creating an inclusive environment for ideas to flow freely from all employees across all generations, genders and races.

Other areas in the research included finance and investments, professional development, and the pursuit of "side-preneurship," especially by Black women who were three-times more likely than their white counterparts to be leading a side business in their spare time.

Stewart and Adams' findings are particularly pertinent as we continue to see a number of landmark appointments to leadership positions by women of color.

Stewart and Adams said: "The bottom line is that great leaders and managers - male and female - want to win. We advocate for a commitment to manager excellence through additional manager training and finding ways to create psychological safety so that everyone, especially the white male managers, can confidently 'team up' with highly qualified, ambitious women of color."

The Executive Leadership Council's (ELC) decision to announce with Stewart and Adams on the release of this consequential survey's findings is particularly significant because the information directly aligns with the organization's purpose of increasing the number of successful Black executives by adding value to their development, leadership, and philanthropic endeavors across the life cycle of their careers. "The past several months have seen multiple Black women make history rising to CEO positions in Fortune 500 companies and the highest leadership positions in government," says Michael C. Hyter, President and CEO of The ELC. "The issue is not the lack of qualified Black women. It's the lack of opportunity for Black women to ascend to these roles. The ELC is proud to support this research to empower and energize Black women, and enlighten their organizations, as they strive for future career success."