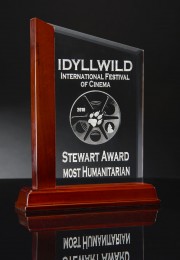 Los Angeles, CA, February 9, 2016 (Newswire.com) - ​​The Idyllwild International Festival of Cinema in Idyllwild, California, recognized The Truth About Synthetic Drugs documentary as the most humanitarian film of 2016.

A vital, timely addition to the award-winning educational curriculum of the Foundation for a Drug-Free World, the film defines a synthetic drug as “a manmade drug that tries to simulate or match the properties of actual street drugs.”

"These drugs turned me into a monster. It's the most dangerous thing I ever have done in my life."

The film underscores that the effects are unpredictable and can be disastrous. Among the points made:

·      According a report issued by SAMHSA (the Substance Abuse and Mental Health Services Administration), synthetic cathinones [marketed as “bath salts”] were responsible for over 22,000 ER visits in 2011.

The Truth About Synthetics Drugs documentary is part of Foundation for a Drug-Free World’s hard-hitting multimedia approach to drug education, including public service announcements and 14 fact-filled booklets on the most commonly abused drugs. The entire synthetic drugs curriculum is now available through the Foundation’s website and incorporated into their Drug-Free World app.

The Truth About Drugs materials dispel pro-drug myths and reach youth with the factual information they need to make information decisions not to use drugs.

By survey, one of the most effective features of the program is its use of former addicts, whose honest and sometimes brutal accounts of life as addicts gets through to young people.

“These drugs turned me into a monster,” said a young man interviewed in the new The Truth About Synthetic Drugs documentary. “It’s the most dangerous thing I ever have done in my life.”

A young woman recalls she was “spinning around, felt crazy—screaming my head off.”

“I wouldn’t give bath salts or K2 spice to my worst enemy,” said another former synthetic drugs user.

The Truth About Drugs curriculum is in use in more than 5,000 schools internationally, over 200,000 students have been educated with these materials and more than 1,000 police departments use these materials in their drug prevention programs.

The Foundation for a Drug-Free World provides every element of the program through their website at drugfreeworld.org for anyone wishing to use these materials online. They may also order sets to help a friend or family member or to provide drug education in their schools, groups or communities.

The Foundation also provides an educator’s kit free of charge to educators, law enforcement officers and other drug prevention specialists who teach students 11 years of age and above in classroom, group instruction or community learning settings.

The Church of Scientology supports The Truth About Drugs drug education and prevention initiative.

Scientologists on six continents work in partnership with educators, law enforcement and community and civic groups to empower others with the truth about drugs. The Church and its members are dedicated to eradicating drug abuse through education.