New Climageddon Book on Global Warming to Be Given Away Free to Support the Washington DC and Sister Climate Marches, April 29th Saturday 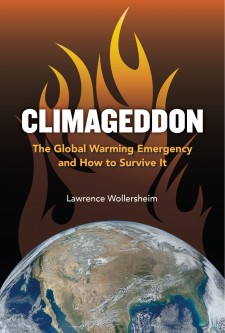 Alameda, California, April 27, 2017 (Newswire.com) - Job One for Humanity, a non-profit organization dedicated to ending global warming in the next 10 years, in co-sponsorship with the People’s Climate March is giving anyone going to the Washington DC People’s Climate March or its sister marches, or wanting to go to this march but unable to attend, a free copy of Climageddon: The Global Warming Emergency and How to Survive It by Lawrence Wollersheim.

The eBook is priced at Amazon $9.95 and until midnight May 1st, anyone who goes to the climate march or wants to go to the huge Washington or sister climate marches, will receive a free Climageddon copy. All they have to do is send an email to ClimateMarch@joboneforhumanity.org and ask for the free ebook and downloading instructions will be sent to them. This free book offer expires at midnight Pacific Time on May 1st.

“We wanted to express our gratitude to all the climate activists and individuals attending the climate marches this weekend or who want to go but can’t and, who will help focus attention on this unprecedented emergency.” said Wollersheim, who is also Executive Director of Job One for Humanity.

Climageddon’s Unique Contribution to the Discussion

This new book, “radically disrupts what most informed individuals currently believe. In its new model of our rapidly destabilizing climate (the Climageddon Scenario), it uses big data analytic methodologies to predict the likely progression of global warming consequences rapidly coming our way,” says early reviewer Michael Mielke, a well-known environmental activist, fund-raiser and head of the Association for the Tree of Life organization.

Wollersheim explains that in writing the book, he “went beyond the current statistical models that try to predict the future of the climate and also focused on the cascading effects of all causes and consequences upon each other.” This revealed a situation that is far more dire than most people -- even those who are well informed -- believe to be the case.

After making the case in the first portion of the book’s 440+ pages that the situation demands special treatment as a global emergency, the book proposes a specific, step-by-step plan that is unlike any other that has yet been attempted to deal with the global warming emergency.

“To avoid the possible extinction of human life on earth, the Job One Plan appears to be the only practical plan that has been put forth that is on a grand enough scale to succeed before certain irreversible climate thresholds are crossed while also being within the grasp of a reasonably small, dedicated force of activists,” says Job One’s Director of Strategy, Dan Shafer.

Source: Job One for Humanity

About Job One for Humanity