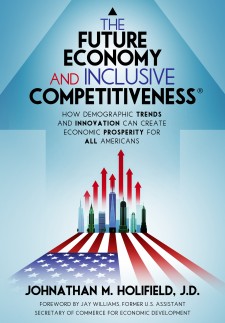 Dallas, TX, April 28, 2017 (Newswire.com) - ​When Johnathan Holifield, a former running back for the Cincinnati Bengals, took the stage at the annual Council on Foundations pre-conference program on April 23, he laid out a game plan for the future of the U.S. economy that intrigued foundation leaders from across the country.

Holifield is the author of a new book, The Future Economy and Inclusive Competitiveness®, which lays out a vision and framework to develop a national economy built for America’s 21st century multicultural society. Holifield’s strategy calls for investing in a national economic infrastructure built on new community systems that are inclusive of women, minorities and rural populations to bolster America’s global competitiveness.

"Brilliant! Unlike any other book written on economic development, this one encapsulates the challenges and opportunities of the nation through the lens of economic inclusion and competitiveness ideals. Johnathan has provided America a treasured asset that will continue to grow dividends over time and offer a wealth of knowledge to benefit generations to come."

“Global economic competitiveness is the game,” Holifield said. “The challenge America faces today is that new technologies have empowered populations worldwide to compete in the game that our nation dominated throughout the 20th century while a significant portion of the USA team sat on the sidelines. Today, in a knowledge-based global Innovation Economy, America can no longer compete on a global stage with less than our full complement of talent, which amounts to competing with one hand tied behind our backs. To retain our lofty position as a world-leading economic competitor, we must invest in cultivating all of our nation’s capacity, including women, minorities and rural populations.”

Holifield was a featured speaker at the recent conference of the Council on Foundations. He laid out several challenges the nation faces, highlighting the inflection point of a deeply segregated society still operating on a plan of 20th century economic obsolescence colliding with a knowledge-based, tech-driven globally competitive innovation economy. This economy is accelerating at a pace that requires a sense of urgent action to ensure large swaths of our nation’s population aren’t left behind.

Holifield is currently assisting Forward Cities, a membership group of four cities (Detroit, Cleveland, Durham and New Orleans), led by Christopher Gergen, that are developing inclusive innovation ecosystems and working together to form a collaborative that learns from one another. Holifield is studying the current strategies and approaches used by these cities to identify and include disconnected communities and populations into existing entrepreneurial ecosystems. He is advising the Forward Cities collaborators to help improve their processes with an overarching vision and strategy that can be used to scale up measurable outcomes that connect to existing metrics within regional economic competitiveness plans. Using strategies from his book, Holifield is actively engaged in helping cities establish winning economic frameworks built on the foundation of Inclusive Competitiveness.

Johnathan Holifield has a uniquely deep and diverse background as a former NFL player, attorney, civil rights advocate and innovation-based economic development leader. He is co-founder of ScaleUp Partners, a national consultancy specializing in development of inclusive economic ecosystems. As the architect of Inclusive Competitiveness® Holifield wrote the nation’s first policy report on the topic, which was unanimously adopted by the former Ohio Board of Regents and titled, Inclusive Competitiveness: Empowering Ohioans to Compete in the Innovation Economy.

ScaleUp Partners is a national consultancy specializing in development of inclusive economic ecosystems.