Experience an autobiography like no other, when you pick up author Allan Ackerman's new book. Available today from Columbia, SC 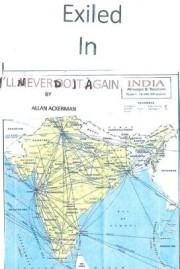 Columbia, SC, November 17, 2015 (Newswire.com) -  Author Allan Ackerman, a northeast resident for over 40 years and a UNC graduate in 1963, with a major in political science and a sub major in international law recently released his new book titled, “Exiled in India”.

“My 18 month experience in good old India as an American the time I have spent in this 21st-century cannot be appreciated, until you experience a country that is still in the 19th century,” said Ackerman. “The judicial system, legislation system, and the executive system are all autocratic even though they claim to be a democracy everything we see or shown is not the truth we are given.”

According to Ackerman, “Our blood and arc money while we think will be useful to settle their age old problems, are a farce in my opinion for what I know now, all of these countries India Afghanistan Iran Pakistan, Syria and Iraq are places we should watch from afar and stay as far away from their internal affairs as possible, food and water okay money and American blood we should keep to ourselves.”

Details about the book can be found at www.exiledinIndia.com or www.exiledinIllneverdoitagain.com about the riveting story that Ackerman lived through.

Readers can experience the adventures of Allan Ackerman, the president and CEO of Poseiden Corporation Inc., as he traveled in India. “Exiled in India” takes you half way across the world to the mysterious and ancient land of India. In the book, Allan arrived in India, and he soon found himself trapped, tricked, and lied to. The very first investors he met had an incredibly convincing scheme. This played out for two years with the crooks leading the way. Between July and August of 2013, Allan soon became the only Caucasian American jailed in India. He found the only way to maintain his peace of mind was by keeping a diary, and this diary became the notes for his new book.

“The very idea that we do not need to go into these countries with our blood and our money to help countries that have been fighting for well over 1,300 to 14,00 years and think we are NOT going to change these autocracies to democracies are just a joke on ourselves our money and our blood has given me a look into the Third World,” said Ackerman.

For more information about “Exiled in India” and author Allan Ackerman, visit: www.exiledinIndia.com

This riveting adventure is a true story that keeps your eyes glued to each page. Written by the president and CEO of Poseiden Corporation, Inc., Allan Ackerman, in Columbia, South Carolina, it follows his 18 months spent in India. What he reveals in his autobiography is the real side of India that is not the prosperous, commercial side of the country that is frequently shown.

Allan's work uncovers the truth behind India's cost of living, labor, and accommodations. He shows that this culturally rich nation has a dark side, and that their political platforms are run by 19th Century standards in their judicial, legislative, and executive levels of government.