'Green Day Rising: Before the Dookie Flew' Delivers an Intimate Look at Billie Joe Armstrong and Company on the Brink of Fame. 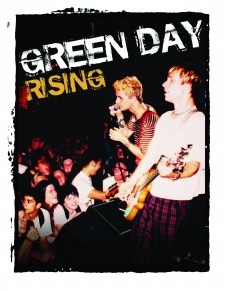 On July 5, 1994, Green Day was poised to emerge from the punk cocoon of 924 Gilman Street and develop into a band that has delivered a decades-long run of bird-flipping, thought-provoking and hit-making music.

Before they grabbed headlines by inciting a mass mud fight at Woodstock '94 and ignited the charts with blistering punk salvos like "Welcome to Paradise" and "When I Come Around," Billie Joe Armstrong, Mike Dirnt and Tré Cool bid one last goodbye to the small-club scene of the Bay Area, playing an intimate show at San Francisco nightclub Slim's to host a bon-voyage party that still rattles the minds of the lucky few who attended.

“It’s was one of those moments in life when you realize you’re witnessing history in the making,” says Mike Sharon, co-author of Green Day Rising: Before the Dookie Flew. “We didn’t need to wait for Woodstock ‘94 to happen – it was going down right in front of our eyes.”

Green Day Rising: Before the Dookie Flew captures the band at the cusp of mainstream success with dozens of never-before-seen photos and eyewitness reporting, delivering an intimate portrait of a phenomenon-to-be that obscurity couldn't confine, genre couldn't define and the world had no idea was coming.

“The amazing thing about Green Day during this period was that, even though they were in their very early twenties, they were already incredibly evolved and self-aware,” says Tim Kenneally, co-author of Green Day Rising: Before the Dookie Flew. “Like the Beatles, who had also honed their craft for years in less-than-ideal circumstances, Green Day was fully ready to take on the world -- even if the world didn’t realize it yet.”