New Blockchain Application Lympo.io: Can This Technology Transform the Fitness and Well-Being Sector? 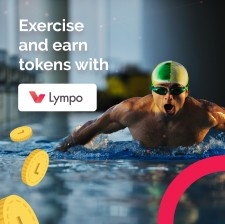 VILNIUS, Lithuania, December 5, 2017 (Newswire.com) - A new blockchain application, Lympo.io announced the date of its pre-ICO (initial coin offering), December 14, with a goal to build a unique healthy lifestyle ecosystem starting with a fitness wallet. It will utilise the data we track on our phones and wearables to reward LYM tokens for achieved fitness and mindfulness goals. More on www.lympo.io.

Digital health market is exploding both in the number of new companies in this field and the expected market size of $233.3 billion by 2020. In 2016, the estimated number of mHealth apps showed a yearly increase of 57% with the number of downloads totalling 3.2 billion.

Lympo.io will utilise the data we track on our phones and wearables to reward LYM tokens for achieved fitness and mindfulness goals.

While hundreds of millions of people track their fitness and wellness data on multiple running, exercising, diet, meditation, sleep tracking and other apps, their users cannot aggregate and store, share or monetise this data.

This will change with Lympo. www.lympo.lt started as a platform to find the best personal trainer or any sports coach near you and quickly became the biggest platform in a country where the MVP (minimum viable product) was tested, Lithuania.

Lympo challenges the existing gym business model by offering its trainers a subscription to train in any gym partnering with the platform. “Just as Airbnb is the biggest hotel in the world without a single hotel building and Uber the biggest taxi company without a single car, Lympo will unite the biggest fitness and healthy lifestyle community without a single gym”, said CEO Ada Jonuse, recently named an emerging tech star of Central and Eastern Europe by the Financial Times, Google and others.

After launching www.lympo.com in the U.S. in the State of California early next year, Lympo will allow everyone to test its prototype by participating in a running challenge and receiving tokens in reward.

Lympo tokens will serve as utility tokens on the platform to buy online and offline fitness sessions, diet and exercise plans, and subsequently, more and more healthy lifestyle products and services from Lympo partners. User-generated and user-controlled data will be the driver of this ecosystem.

Lympo will offer its early adopters a chance to test the product in February earning even more tokens. Join Telegram channel: https://t.me/lympo.