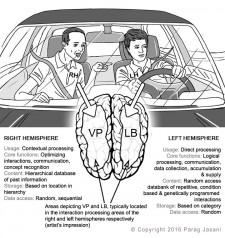 Mumbai, India, April 19, 2016 (Newswire.com) - Modern science has gained tremendous amounts of information about the human brain, but very little is known about how it creates what we call mind. The first comprehensive approach by Parag Jasani of DOS Labs to understand how mind causally functions in the brain has revealed the fact that both brain hemispheres play a central role in creating the mind.

The approach has led to the development of the Dichotomized Operating System model (or DOS model), a functional model of the mind which reveals that the left and right hemispheres in a typical human brain work as a team to reach common goals by processing information in direct and contextual manner respectively, as explained by the analogy below:

Father and Son analogy: A son is guided by his father as he drives a car to reach a destination. The son thinks logically and executes actions efficiently, as he is young and physically fit. He avoids other cars, people crossing roads, etc. and follows traffic lights, diversions, dividers, etc. on his own — but consults his old father, who is not as physically capable or as quick and strong in logical processing as his son — but possesses wisdom derived from decades of experience of driving on city roads for traffic trends, dangers, shortcuts, etc. — which would help him choose the best path to take to reach the destination (http://goo.gl/G5ELj6).

As per the analogy, the way the son avoids other cars, people crossing roads, etc. and follows traffic lights, diversions, etc. on his own, the left hemisphere executes such repetitive, preset and rule based tasks on its own - which is the basis of unconscious processing in the brain. In the way the son consults his father for navigation, the left hemisphere consults the right hemisphere when new judgments are to be made on how to interact further, which provides guidance using past data stored in its database - which is the basis of conscious processing in the brain.

Using such duality, the model reveals for the first time the reason behind the decades-old view that the left hemisphere is involved in logical, analytical, factual, detail oriented, etc. processing, and the right hemisphere is involved in holistic, creative, emotional, subjective, artistic, imaginative, etc. processing. There are, however, a growing number of scientists who reject such duality (more http://goo.gl/IVeCA9).

“Science will not be able to understand phenomena like emotions, sleep, dreams, creativity, music, humor, love, sex, art, etc. at fundamental levels without accepting the duality of brain operations suggested by the model, as it plays a major role in all such phenomena. As a matter of fact, such duality is the reason the brain has two hemispheres,” says Jasani, the developer of the DOS model (more http://goo.gl/ADSqHo).

“Take the thought process for example,” he adds, “The process of thinking is one of the most ubiquitous phenomena in all of mankind. All human actions and accomplishments are a direct result of the thought process. In spite of that, modern science has no clue as to how thoughts and language are generated from neural communications in the brain. The reason for the same is that modern science does not consider communication between hemispheres, which is the birthplace of all verbal and non-verbal communication. Using such duality, I have explained the process of thinking in full detail, which is the first and only explanation available today of how the thought process works” (more on the mini site http://www.ThinkingExplained.com).

According to Jasani, due to its causal approach, incorporating the model with neuroscience can, besides saving time, effort and energy, save billions of dollars currently being spent on projects like the Human Brain Project, BRAIN Initiative, etc. while benefiting mankind to levels not imagined before (more http://goo.gl/fVtEzx).

He concludes, “Even with exponentially growing technology, many mental phenomena will remain to be mysterious until science considers the duality suggested by Dichotomized Operating System, the operating system of the brain.”

Company involved in research and development of the Dichotomized Operating System model.