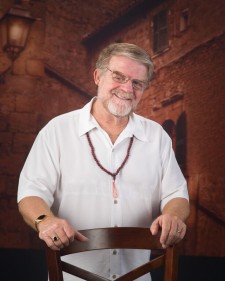 Fulton, Texas, July 29, 2016 (Newswire.com) - Composer Bill Wren, known as the "Rare Texas Songbird," has released his third album, Road To Chiang Mai, on the Ponder Dust record label. His first two recordings, One day in A Life and Journey Around The Sun, garnered universal acclaim from music critics and received airplay on both FM and satellite/cable radio.

In 2012, during a break from composing music, Wren met his second wife (his first wife died earlier that year), Tamara and wound up joining her on her travels to Thailand and Cambodia, part of which were spent in an elephant sanctuary in Chiang Mai, Thailand. The sights and sounds in southeast Asia proved to be a huge inspiration for Wren. The end result is Road To Chiang Mai.

Ethnic instruments and wooden flutes blend with lavish string arrangements, driving drum beats, electronic elements, and more to produce an elaborate cinematic production that brought to mind the grandeur of music from Yanni or David Arkenstone

As on his previous releases, Wren worked closely with orchestrator and arranger Frank Ralls, who also produced the album. Featuring musicians on guitars, banjos, bass, penny whistle, drums, keyboards, cello, violin, and a full string section, the music touches on a variety of influences and genres, not just Asian but also Celtic, new age, and instrumental pop. Noted music journalist Michael Diamond of Music and Media Focus said of Road To Chiang Mai " On his latest release, Road To Chiang Mai, veteran music composer Bill Wren explores new musical terrain that is as exotic as it is eclectic. With elements of new age, contemporary instrumental, and world music, Bill’s lavishly orchestrated compositions evoke stunning sonic vistas that stir the imagination with their unique synergy of East and West."

Road To Chiang Mai and other Bill Wren albums are available as both downloads and physical CDs from Amazon and CD Baby and as a download-only on iTunes.