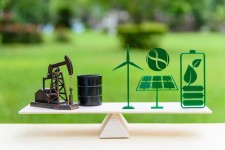 ​​The discussion over fossil fuels has led to many great innovations. Solar cells, wind turbines, and even geothermal energy serve as viable, reliable alternatives to digging up "dinosaur guts" and using them to fuel the global economy. Burning biomass like in California, however, is one of the most misguided reactions to the modern energy crisis yet to be concocted.

Proponents of biomass say that this energy source is sustainable because it comes from trees, which are a renewable resource. It's clearly not sustainable, however, to continue ladening the atmosphere with carbon dioxide. Cutting carbon emissions is, after all, the sworn goal of practically every environmentalist in the world.

To make our way toward a truly sustainable future, we must cut carbon emissions in every form. Simply switching from one form of carbon-producing fuel to another will do nothing but continue to line the pocketbooks of special interests that don't truly care about the environment or the future of humanity at all.

A Bright Future with the Neutrino Energy Group

The main issue with solar power is that it is inconsistent. Solar cells only operate at peak efficiency when exposed to direct sunlight, and they do not produce any power whatsoever at night. With neutrino-based power systems in place, solar energy could simply supplement the constant energy flow that neutrinos provide at times when peak solar cell efficiency is possible.

In 2015, scientists discovered that neutrinos have mass, which means these ubiquitous particles can be used to generate energy. Laboratory experiments have already proven neutrino-based energy to be viable, and it's only a matter of time until this technology reaches the consumer sphere.

Neutrino energy offers a variety of improvements to existing renewable energy technologies. For instance, neutrino-based energy generation systems operate ceaselessly since neutrinos can pass through almost every material known to man. From there, appliances, cars, and even entire households will be capable of running on this form of decentralized, ubiquitous power that puts other traditional energy options to shame.

At the Neutrino Energy Group, founder Holger Thorsten Schubart and his international team of pioneering energy scientists are committed to a future that is both sustainable and clean. Technologies like neutrino energy allow the world to take a giant leap into a future of freedom.

Neutrinovoltaic - Researchers around the world are working on the next generation of Solar Energy
While neutrinovoltaic technology is one of the newest forms of energy production, Neutrino Energy Group is pleased to announce that this paradigm-shifting technology is already making waves around the world. Derived from combining the words "neutrino" and "photovoltaic," neutrinovoltaic technology produces electrical energy from the ghostly neutrinos that bombard everything by the billions during every moment of every day.
Seodiddy - May 5, 2021

The Neutrino Energy Group Will Liberate Mobile Devices From the Grid
Mobile devices, including smartphones and tablets, have revolutionized the way we process data and access the internet. With nothing more than the smartphone in your pocket, you can run a business, learn a language, or interact with your friends, family, and peers with hitherto unimaginable convenience and efficiency.
Seodiddy - Feb 12, 2021
Newswire