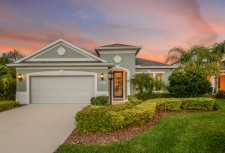 In 2017, the private builder celebrated a recording-breaking year, notching 1,177 homes sold that spanned from Hillsborough to Collier counties.

“The first month of the year has traditionally been the forerunner of the sales environment for the remainder of the year so we always like to start out strong,” said Michael Storey, president of the Lakewood Ranch-based new homebuilder. “With several new communities opening this quarter and a continued focus on building inventory homes for buyers looking for quick moves, we expect to see continued positive, steady sales growth this year.”

Grand Palm in Venice continued to be a sales leader for the builder in January, leading with 19 sales. In 2017, the builder unveiled eight new models at Grand Palm and opened Aucilla Road, which was created specifically to serve as a new entrance for the community. Located off River Road in Venice, the new entry and road gives residents on the east side access and further helps to reduce traffic at the other two existing entrances.

Other notable communities included Milano in Venice with 14 sales and Silverleaf in Parrish with nine sales. Later this year, Neal Communities will debut four new models and new floor plans at Silverleaf.

Next weekend, Neal Communities will host a grand opening event to unveil Tides End, a private, island-style community in prestigious northwest Bradenton. From 11 a.m. – 1 p.m. on Saturday, Feb. 17, guests can enjoy refreshments and music and enter to win raffle prizes. Attendees can also learn about the idyllic neighborhood, tour its new single-story model home and explore Tides End, which will feature 38 coastal-inspired homes with a one-acre park at its center.

With over 40 years of building award-winning homes, Neal Communities has over 70 successful communities throughout southwest Florida. The Lakewood Ranch-based builder was named the Professional Builder 2015 “Builder of the Year” and was named one of 2012's "America's Best Builders" by BUILDER Magazine and voted the “2013 Best Residential Builder in Southwest Florida” in a readers’ poll sponsored by Gulfshore Business Magazine. The company is ranked No. 1 locally by Metrostudy and by Hanley Wood Market Intelligence based on number of home sales and ranked nationally among the top 50 builders by BUILDER Magazine.