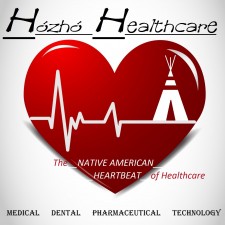 WICHITA, KANSAS, April 26, 2017 (Newswire.com) - Hozho Healthcare is a 100% Native American owned company utilizing the Federal Buy Indian Act to pursue part of the multi-billion-dollar budget of federally funded Indian Health Services for supplies, equipment and pharmaceuticals that is currently funneling federal tax dollars through the largest corporations in American and oftentimes across the ocean into global enterprises. As this budget of Indian Health Services, that is guaranteed by law of treaty, has grown almost a half a billion dollars since last year, Hozho Healthcare will be offering a better system of pricing and lowering the yearly need from all citizens in the United States paying federal taxes. In addition, the profit from these activities will be used to fund various needs on the tribal reservation such as help for Veterans, Elders, and with basic needs such as those living without water or electricity in the year 2017.

The team is led by Jylissa Spicer, who holds board certification as well as medical malpractice insurance in multiple states. Her husband is Michael, who has been featured as an inventor and manufacturer in multiple publications as well as served as the VP of some of the most successful companies entering the Indian Health Services market over the last 15 years. Their leadership and experience will be directed toward their constantly growing team that already encompasses members on 412 out of the 566 federally recognized tribes. This partnership could bring the tens of thousands of jobs currently operating from this budget but outside of reservation lands back into the economy of the reservations, where unemployment is over a staggering 50%, which provides a breeding ground for the ever-growing problems and issues that plague our Native American population.

We can solve the problems on the Tribal Lands for the Native American people while also cutting a half a billion dollars a year off the budget supplied by federal taxpayers.

After personally spending almost 9 years and over a half a million dollars to arrange these product lines and arrange compliance with FDA regulation issues, Hozho Healthcare is preparing to launch with the manufacturing of 2 FDA-approved items on reservation lands that currently are worth hundreds of millions in sales into Indian Health Services each year. Hozho will be utilizing a distribution center to bring in other items in bulk ordering cost in order to provide the best pricing to customers, with Indian Health Services as the main target.

Several multimillion dollar funding options were received — such as for 49% ownership from the largest companies operating in the space, as well as from an investment firm with $33 billion in the market — however, these offers were refused based on their restrictions of keeping the profit flowing out of the reservation to investors and the jobs out of the Native American economy to increase the profit margin to the highest point possible. With United States banks unable to fund projects with locations on tribal lands due to them being unable to satisfactory enforce their loan terms within Native American Tribal lands, Hozho Healthcare will be launching a media campaign to gather awareness to their crowdfunding campaign. Hozho Healthcare has strategically placed their launch pad site in Wichita, Kansas, to target some of the largest companies and wealthiest people in the world who have made their billions from oil, casinos and, in some cases fraud within tribal lands and with tribal people. Stage A funding is set at $750,000 with full manufacturing and operations set at $3,500,000 — a valuable proposition compared to the cost of lesser operations as well as the budget reduction and profit funds developed for grants.

Hozho Healthcare hopes every person in America and beyond will support this project and offer their funding to help redirect the federally supplied Indian Health Services budget down at a rate equaled by the reduction in problems and issues within the reservation lands.

Information on our contact with various professional sports teams with Indian mascots, oil, and casino groups, as well as with the billion-dollar elite of Wichita, Kansas, can be found on our Facebook page with additional information at www.HozhoHealthcare.com

Updates can be found at: https://www.facebook.com/HozhoHealthcare/

Funds can be donated at: http://www.gofundme.com/HozhoHealthcare