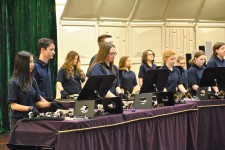 Fredericksburg, VA, April 21, 2017 (Newswire.com) - The National Honors Handbell Ensemble features 30 of America's top handbell musicians performing together for the first time after an intense weekend of rehearsals. The group is comprised entirely of teen musicians, but that doesn't mean any less is asked of them. The repertoire the group plays — selected, directed and conducted by noted handbell composer/arranger Kevin McChesney — is among the most challenging music published for the instrument. McChesney, who has well over 1,000 published compositions, should know. He demands that the ringers perform at the highest level of professionalism as he guides them through the rehearsals and conducts them in concert.

This year, the Ensemble attracted the attention of Virginia Governor Terry McAuliffe, who called the event, “a celebration of hard work, discipline, and devotion to the art of handbell musicianship.” In a letter to the Ensemble members, he went on to say, “The National Honors Handbell Ensemble offers the public a unique opportunity to experience a great concert performed by 30 of the best handbell musicians in the United States.”

The students who comprise the ensemble are chosen from a nationwide pool of applicants. Each applicant submits to a grueling vetting process until the final Ensemble is chosen. The young ringers receive music in advance and are expected to arrive having already put in hours of rehearsal. They gather at the Stafford Handbell Society’s rehearsal studio in Fredericksburg on Friday and Saturday for 14 hours of rehearsal with Mr. McChesney. The Stafford Handbell Society sponsors the event annually as part of its mission to advance youth ringing.  Says Musical Director Phillip Lanier, “We began as a youth music education organization, and that still remains one of our core values.” The Society now has 6 youth and children’s ringing ensembles and an expansive after-school handbell program, as well as 4 adult ensembles that rehearse each week.

The final concert is April 30 at 4 p.m. in the Washington Ballroom of the Wyndham Hotel in Fredericksburg. The event is open to the public and tickets are available in advance by calling 540-850-3700, or at the door.  For additional information, see www.nationalhonorshandbellensemble.com

The Stafford Regional Handbell Society is the only community handbell organization in the Fredericksburg area. With 10 ringing ensembles, the Society offers musical opportunities for every age and every skill level.