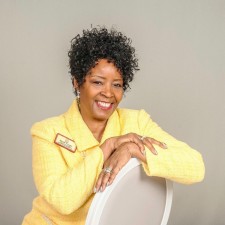 On Friday, July 19, at the 82nd National Convention of the National Association of Negro Business and Professional Women’s Clubs, Inc., the members voted to elect their new national president. Sherelle T. Carper is the president of a local club, the Northern Virginia Business & Professional Women’s Club. Carper expects to step down as the president of the local club as of Aug. 1 to assume her position as the 24th national president. Held at the Westin Fort Lauderdale Beach Resort in Florida, the voting took place in the early morning and the results were announced that same afternoon. Carper walked away with more than 65 percent of the votes. The installation of new officers was carried out by a local judge of Fort Lauderdale at the closing banquet that Saturday evening, July 20. In the association, the tenure of the presidency is two years, with the ability to be reelected for another two years. She is then required to step aside before being able to seek that particular office again.

86 years ago in 1934, Emma Odessa Young, a realtor in New York City and a member of the New York Club of Business and Professional Women, came up with the idea of establishing a national organization throughout the United States. In July 1935, Ollie Chinn Porter, president of the New York Club, extended an invitation to local clubs, organized as Business and Professional Women’s Clubs, to join and form a national organization. During that era in history, Black people were referred to as “Negroes”; therefore the word, “Negro” is used in the name of the national organization as opposed to “Black” or “African American.” The fact that these black women had the courage to found such an optimistic organization is astounding and a lasting testimony to the faith they had in themselves, their people, and the future.

Prior to her recent election, Sherelle Carper was the president and co-founder of the Northern Virginia Business & Professional Women’s Club; the club was established as one of the Mid-Atlantic regional clubs of the national club. She started as a junior member with the national club and remained with that club until she was old enough to become an adult chartered member. Carper obtained her education from the University of Virginia and the Darden Graduate School of Business Administration. A resident of Centreville, Virginia, she worked as an air traffic controller at the Federal Aviation Administration. She also was a manager at the FAA. Carper has been vigilant in her support of local community groups and organizations. She currently serves on the advisory board of Fairfax-based Global Woman P.E.A.C.E. Foundation.

With their mission stated in four parts, the club is committed to promoting and protecting the interest of African American business and professional women, to serving as bridges for young people seeking to enter business and their professions, to improving the quality of life in the local and global communities, and to fostering good fellowship.

Carper’s home club, the Northern Virginia Business and Professional Women’s Club, proudly congratulates its president on her victory to lead on the national level.​