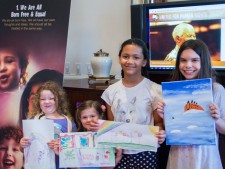 NASHVILLE, Tenn., July 28, 2019 (Newswire.com) - The Nashville Church of Scientology held a community open house on Mandela Day where four young artists, Norah and Jazzelyn, age 11, and Harper and Annalise, age 5, were announced as the winners of the Youth for Human Rights Summer Art Contest.

Those attending the event watched a visual biography of Mandela’s life, where they learned about the challenges he faced and the tremendous impact he had on his own nation and the world.

Nelson Mandela International Day is celebrated each year on 18 July, Mandela’s birthday. The day was officially declared by the United Nations in November 2009, with the first UN Mandela Day held on 18 July 2010. The Mandela Day campaign message is: “Nelson Mandela has fought for social justice for 67 years. We’re asking you to start with 67 minutes.” According to a statement issued on Mandela’s behalf on the adoption of his day by the United Nations, his hope was that it would “bring together people around the world to fight poverty and promote peace, reconciliation and cultural diversity.”

It was with exactly these aims that the Church held its Mandela Day open house and sponsored the Youth for Human Rights Summer Art Contest—to inspire young people to learn more about human rights and become human rights advocates.

“It is vital that all thinking men urge upon their governments sweeping reforms in the field of human rights.”

“It’s so important for people to learn at a young age what their human rights are,” said Rev. Brian Fesler, pastor of the Nashville Church of Scientology. “We live in a world where rights are being taken away by those seeking to oppress and this is made easier by the fact that people just don’t know what their rights are. Education is vital in this battle against ignorance and oppression.”

Human rights are an integral part of the Scientology religion. The Creed of the Church of Scientology, written in 1954 by Scientology Founder L. Ron Hubbard, begins: “We of the Church believe: That all men of whatever race, color or creed were created with equal rights.” And the Code of a Scientologist calls on all Scientologists “to support true humanitarian endeavors in the fields of human rights.”

The Church of Scientology and Scientologists support United for Human Rights, the world’s largest nongovernmental human rights education campaign, active in 192 countries. The initiative is inspired by Mr. Hubbard’s conviction that “It is vital that all thinking men urge upon their governments sweeping reforms in the field of human rights.”

To learn more about the history of human rights and the 30 Articles of the Universal Declaration of Human Rights, watch the human rights programming on the Scientology Network.