Naming Rights for Sale at City of Barrie's Premier Arena

The City of Barrie wants to hear from individuals or businesses interested in securing the naming rights to the Barrie Molson Centre (BMC). The current name will be replaced by the end of 2018. 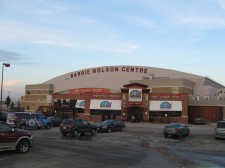 BARRIE, Ontario, January 16, 2018 (Newswire.com) - "The naming rights of this arena is a huge opportunity for a business that wants to stand out in our growing city and region," said Rebecca James-Reid, Executive Director of Access Barrie with the City. "Any company associating their name with the venue would benefit from a high level of visibility and exposure year-round."

The BMC is well-known with an established reputation as the region's premier sports and entertainment venue. The 110,000 sq. ft arena is home to the Barrie Colts (OHL team) and many other notable entertainment activities throughout the year such as concerts, trade shows and special events. The arena opened on December 31, 1995 with seating for up to 5,000 and has an annual attendance of over 300,000.

The building is located just off of Highway 400 at Mapleview Drive and Bayview Drive. This is one of the busiest intersections in the city, with a total 112,000 vehicles using the local roads each day. The facility is also visible to northbound traffic on Highway 400 which sees more than 14 million vehicles each year.

About the City of Barrie

The Barrie census metropolitan area (CMA) has a population of 187,013, making it the 21st largest CMA in Canada. The surrounding area of Simcoe County has a population of 479,650 people. The City of Barrie itself is expected to grow to 210,000 people by 2031 (49 percent growth) and has been identified by the Ontario government as an Urban Growth Centre. Currently Barrie households have a median total income of $91,011—higher than the Ontario median, and the city is expected to account of 41 percent of all future job growth in the Simcoe County area.