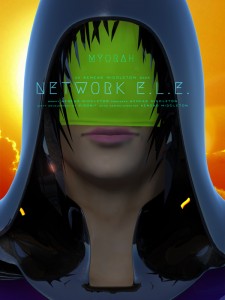 NEW YORK, March 11, 2020 (Newswire.com) - Multi-platinum producer/author/director Aeneas Middleton has begun a new journey into virtual reality, with his first release under the Royal Middleton Entertainment brand launching soon. He has big plans on moving forward into one of the biggest growing markets of entertainment. Middleton hired VironIT, based in Belarus, for unity programming while working on 3D modeling, producing, art direction, marketing and the overall look in the United States.

On May 22, 2020, Middleton will be releasing Network E.L.E. on Valve's Steam platform. Network E.L.E., the first video game release under Royal Middleton Entertainment, will be compatible with HTC's Vive, and Valve Index headsets. Inspiration for the video game came from the Hideo Kojima's Metal Gear Solid series and a dream Middleton had while making his first theatrical film "Cranium Intel."

"I had this dream, an idea that I knew could capture the world. I began writing down ideas originally to make a film, but as VR grew, I knew this was the platform I needed to start off with," Middleton said. After watching "Ready Player One" by Steven Spielberg, Middleton was fascinated by how far virtual reality has grown. His first experience with VR came from the movie "Lawnmower Man." Expect a different type of game. Something new. Middleton calls it a first-person shooter, strategy game.

"A lot of virtual reality fans are watching and waiting for this game. My job is to execute something that is new, not just making a game. This is a major investment for me. A passion project. This technology fascinated me in every way. I want to change something visually," Middleton adds. "Will Network E.L.E. be the next VR hit? I guess we'll have to wait to find out."

Link to game on Steam

Is Tim Hartwell the Welsh Harry Potter? Director Aeneas Middleton on Getting Royal Family Approval
Multi-Platinum Producer/Author/Director, Aeneas Middleton wrote his first novel from the fantasy Tim Hartwell series in 2010. He has received royal attention from multiple royal families around the world, including the Duke & Duchess of Cambridge.
Royal Middleton Entertainment - Jul 7, 2015
Newswire