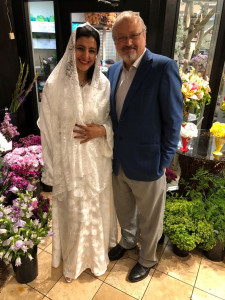 WASHINGTON, July 12, 2022 (Newswire.com) - Today, Mrs. Hanan Elatr Khashoggi was invited to meet with senior officials at the White House as President Biden prepares to depart for the Middle East. Mrs. Khashoggi was accompanied by her attorney, Randa Fahmy, Esq., of Fahmy Hudome International.

Mrs. Khashoggi conveyed her thanks to President Biden for fulfilling his commitment to human rights and his promise to investigate her husband's murder in a transparent and fair manner. She also expressed her thanks to the President for publicly releasing the intelligence report which led to a very painful understanding of exactly what happened to her husband.

Mrs. Khashoggi's attorney, Randa Fahmy, Esq. added: "It was important for Mrs. Khashoggi to be able to express exactly what Jamal would have wanted if he were alive today, particularly right before President Biden's departure to Saudi Arabia. This meeting is just the beginning of her long road to closure amid her grief. Part of that closure is also to hold all parties accountable for the death of her husband."

Jamal Khashoggi married Hanan Elatr Khashoggi on June 2, 2018, in Alexandria, Virginia, months before he was murdered at the Saudi Consulate in Istanbul, Turkey. As his only wife at the time of his death, it is important to Mrs. Khashoggi that Jamal's true legacy of freedom and tolerance outlive his death.