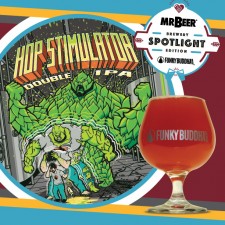 The Hop Stimulator Double IPA homebrew recipe will be available April 22nd on www.mrbeer.com, and only a limited 50 recipes will be for purchase. This Double IPA boasts subtle citrus hop aroma with juicy sweetness and bready, caramel malt flavors.

“Mr. Beer’s goal has always been to provide a simple, time-efficient, and delicious homebrewing process to propel beer fans into the hobby,” said Bridges. “Partnering with a fun and outside-the-box brewery like Funky Buddha is an exciting opportunity, and we are hoping that this recipe motivates beer fans to try their hand at homebrewing.”

Hop Stimulator Double IPA is Mr. Beer’s newest release in its Brewery Spotlight Edition series, which features clones and collaborations with breweries Mr. Beer finds the most buzzworthy. The series has also spotlighted Cerealiciously Lucky Charms Milk Stout from Black Bottle Brewery and Golden One Belgian-style Blonde Ale from Anthem Brewing Company, to name a few. “Our Brewery Spotlights allow homebrewers all over the nation to taste craft beer from breweries they’d otherwise not have the chance to enjoy, while confidently brewing that beer themselves with our kit,” said Bridges.

Mr. Beer is the leader in homebrewing kits & the only kit manufacturer owned by an independent brewery. Mr. Beer is committed to providing the best experience possible for first time & repeat brewers with superb support and satisfaction guaranteed.