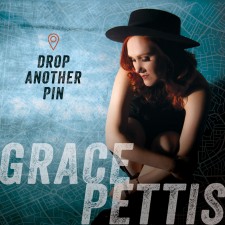 NEW YORK, September 16, 2020 (Newswire.com) - MPress Records recording artist Grace Pettis has released a new single/video, "Drop Another Pin". As premiered today by Americana Highways, the song is a fetching, alt-country-folk ode to living in the moment. Dishing out hearty portions of hooks, this latest effort exemplifies Grace's songwriting mastery and is sure to receive the same critical acclaim she earned with her debut single for MPress, Landon. Inspired by Pettis' own nomadic upbringing across the South, the song has gained new meaning in 2020. Grace explains: "I'm happiest when I'm able to center myself within my own little dot on the map, but I've learned that change is the only constant. Now is the time to get comfortable with change and stay centered in the present."

While the song features co-production and keyboard contributions from fellow Austin native Alejandro Rose-Garcia and was mixed by Grammy® winner Andy Zulla (Kelly Clarkson), the accompanying video to "Drop Another Pin" required a generous serving of DIY from Grace as she made it at home during lockdown. Conceived and directed by Grace, husband Cris Lopez (New Wildebeest) filmed it in 4K on a cellphone. Grace then edited, color-corrected, and added overlays of stock footage. The result is both fresh and retro, with the imagery of an old-time projector bringing out a classic VCR- looking time stamp.

Pettis, an award-winning singer-songwriter from Austin via Alabama, has been characterized as "a little bit folk, a little bit country/Americana and a whole lot of soul." In between recording her forthcoming debut album for MPress and hosting/playing on a multitude of virtual concerts, Grace has been actively advocating for racial justice. She released the powerful song "White Noise", from which all proceeds are being donated to Color Of Change, an organization devoted to racial equality. Grace also holds down duties as a member (along with Rebecca Loebe and BettySoo) of the Americana/folk-pop trio Nobody's Girl.

As a card-carrying member of the south Austin scene, Grace Pettis has been steadily garnering acclaim for many years. She is the winner of many of the nation's most prestigious songwriting contests, including NPR's Mountain Stage New Song Contest and the Kerrville Folk Festival, and has received grants from the Buddy Holly Educational Foundation. Grace's songs have been recorded by other esteemed artists, including Sara Hickman and Ruthie Foster and she added to her songwriting accomplishments in 2019 by signing a publishing deal with BMG. For more information, visit gracepettis.com.