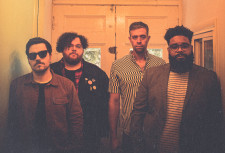 NEW YORK, May 16, 2022 (Newswire.com) - MPress Records has just released "Lost in Art" , the first track/video by A Fragile Tomorrow ahead of the highly anticipated release of their new album, It's Better That Way (out July 15). Directed and produced by Ted Comerford, and filmed at Dreamland Recording in West Hurley, New York. "Lost in Art" features AFT and Peter Holsapple. Premiered by The Big Takeover, the heartfelt/rocking performance shows the band at a lyrical and musical pinnacle that manages to capture both a personal and universally plaintive anthem.

Of the song, Sean Kelly explains, "Lyrically, it addresses some of the resistance I've had over the years to conform to a more mainstream approach to music. Musically, (being my favorite songwriter) it is an attempt to do something in the vein of Neil Finn's solo work."

Watch the Video for "Lost in Art"

It's been three years since AFT's last album, Generation Loss. It's Better That Way is a sonic melting pot, combining many of the band's musical interests and diving into new territory as well. From Krautrock-psychedelia to indie rock swagger, to Crowded House-esque pop songcraft, to British folk and hip-hop-influenced sampling, the album showcases the diversity of the band under the art rock banner, a term that AFT has adopted in recent years that has allowed them the freedom to explore outside of the confines of genre.

Of the album, Sean Kelly explains, "It's really an amalgamation of everything we love and everything we're interested in exploring. It's probably best described as 'art rock,' which is a term I shouldn't like but really do. I think it's a term that throws genre out the window, which is something that appeals to me."