Movie About the Perils of The Global Warming Hoax Launching on Indiegogo Wednesday July 08, 2015

A New Comedy/Documentarty, Called "The Green Lie", Investigates Lies and Cronyism Behind Global Warming that will launch a crowdfund, on Indiegogo Wednesday July 8, 2015. 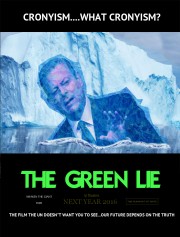 Boca Raton, FL, June 19, 2015 (Newswire.com) - ​​Awaken The Giant Films embarks on a journey going through the history of where the theory of global warming came from, how Al Gore is connected to it, and the cronyism connected to Global Warming alarmism.

The film is in a comedy/documentary format that attacks the motivations of the "The Green Industry" and "Global Warming Alarmists". The film explores several incidents where Global Warming "science" did not come to pass, and recent huge cover ups about scientific data, and the continued manipulation of statements issued on climate change.

Awaken the Giant films announced that they are launching the crowd fund on Indiegogo on Wednesday July 8th, 2015, with a film release that will be available next year in 2016. According to their preview, the perks range from going to the premiere of the film, to taking home collectibles such as t-shirts, and coffee mugs.

The launch of the campaign hopes to have the same success as "Fracknation", and "Gosnell", both indie conservative movies launched via crowdfunding. The movie's main target is Al Gore, one of the fathers of the Global Warming movement.

Awaken the Giant Films has publicized on the website that the documentary will be in a Michael Moore type format, using comedy, music, and entertainment value to lay out the truth about Global Warming.

"The Green Lie" has something to say about the green industry, and it is not complementary. The film shows news clips with the founder of the Weather Channel, Jon Coleman, saying, "the science isn't settled," "science is not a vote, it's about facts." The documentary addresses green cronyism, global warming alarmism, clarifying scientific inconsistencies,  and outright deception in IPCC science. Part expose, part comedy, the film is planned to be released in 2016.

For More Information about "The Green Lie" please visit:

About Awaken the Giant Films:
Awaken the Giant Films is to provide a framework where music, films, and video with “redeeming value” can be developed, produced, and distributed worldwide, bringing a message of hope, truth, and encouragement to this generation. ATGF has assembled several filmmakers, editors, and song composers that have worked on major movie releases in theatres in the faith film industry. Our goal is to impact the world with our message and do it with excellence.