Specialized K-9 would be first for South Jersey town's force. 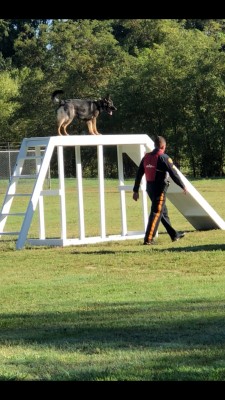 Currently, the Mount Laurel Police Department has two K9s trained as police service and narcotics detector dogs, assisting with and locating missing persons, as well as those attempting to evade apprehension. These dogs also are trained to find illegal narcotics and keep the town’s eight public schools drug-free, as well as to protect officers and the public.

Mount Laurel Animal Hospital has created a fundraiser for the purchase, training and associated expenses to add an explosives detector dog, the first for the township police, to the force. The dog will be used to respond to threats within the Mount Laurel community and at its schools, as well as in other municipalities working with the Mount Laurel Police Department. The increased canine presence also will provide the department with the ability to conduct random, and as needed, searches of area schools for firearms and explosives.

Dr. Robert Mankowski, co-owner and veterinarian at Mount Laurel Animal Hospital says, “We are honored to play our part in keeping the Mount Laurel Police Department K-9s safe and healthy as they work each day to protect our neighborhoods, schools and surrounding communities. In discussions with the K-9 Officers, we felt compelled to step up and help to bring the first bomb dog (explosives detector dog) to Mount Laurel.” Mankowski continues, “We are asking that local businesses and community members join us and rally around this amazing cause by donating. Given the nature of local businesses and corporations in Mount Laurel, Moorestown and neighboring towns, having this asset as part of our community would be such an amazing benefit on every level!”

Businesses such as Kerbeck Automotive and Lockheed Martin are helping support the mission of expediting the process of bringing an explosives detector dog to the community by donating to the project. Members of the community are encouraged to contribute through the project’s GoFundMe page, https://mlahvet.com/bombdog.

The Mount Laurel Police canine unit trains to the highest standard and certifies with the United States Police Canine Association, the largest and oldest canine organization in America. Most recent, Corporal Christopher O’Prandy and K-9 Gunner participated in the USPCA National Detector Dog championship in Albany, NY, where 100 of the top detector dogs in the nation came together for training, certification, and competition. Corporal O’Prandy and K-9 Gunner were recognized as one of the top dogs in the nation and in-room search portion of the competition finished in 1st place with the fastest time.