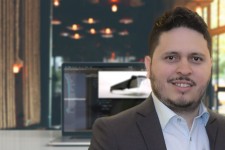 ORLANDO, Fla., March 12, 2019 (Newswire.com) - Many years ago, a new type of technology was developed; it challenges the conventional means of graphic design and audiovisual production. It also challenges the way we learn, teach and use our free time.

Augmented reality or AR, as it is commonly known, has been developing by leaps and bounds since the last decade. There are more and more uses of this technology inside and outside the audio-visual industry. This is the case of the usages of AR in medicine, in aviation, in engineering and of course in the entertainment industry. The growth of this technology and some financial investments, by large companies interested in its development, has led it to be considered by the experts as the next big commercial commodity.

The AR should not be confused with virtual reality. Virtual reality is a simulation generated by the computer that is presented to users in a totally new world and is made to make them believe that they are in it; e.g. video games and movies in 3D. The AR is the interaction of virtual elements within the real world in which we live; that is, it is the transformation of our physical world into one where the rules of physics and logic can be challenged without hindering our immediate reality. Thus, the AR is much more than immersion in a new environment of reality and it is rather the combination of virtual elements with our real world. The elements generated by computers are projected on the real field in a way that helps us develop and fulfill our daily tasks and entertain in a novel way.

It is precisely this type of innovation that the Colombian resident of Orlando Florida and motion & graphic experience designer, Fabian Montealegre, is developing. His interest is the introduction of the AR experience in artistic and entertainment shows. He perceives a show, as one where the public is able to see and experience a high-quality performance by interacting with AR elements. The novelty of this proposal is the ability to transform and include the audience within the show, mixing reality with the fantasy of the show; this is Sci-Fi brought to the real world.

"I am developing a simple and inexpensive device that allows the entertainment industry to provide a new and immersive experience for the audience; currently there are few AR headsets and, for the most part, they are very expensive and complex. I believe the industry needs a less complex and more functional type of device, precisely that is what I am pointing to. Imagine being in the environments of your favorite movies or shows. Being part of the environment, we can be in the air, space, under the water, on another planet; the experiences would be infinite as our creativity allows," said Mr. Montealegre.

The experience proposed by the idea of Fabian could change the way in which the public relates to art, music and all indoor and outdoor scenic spectacles. The mere fact that the public participates immersively in the show, the architectural projection mapping (outdoors) or any live entertainment, would transform the way the audience senses the projection as well as their perception of it. The audience would become agents and the show could propose realities previously unimagined. In Fabian's words, it would be a show at another level.

Fabian Montealegre is a motion & graphic experience designer based in Orlando, his focus is taking advantage of the latest software and technology available, to conceptualize and execute immersive storytelling experiences.