More Than 644,000 Populated Locations in the U.S. Are Further Than 5km From the Nearest Detected 4G/5G Mobile Broadband Cell Site

The United States ranked 18th, according to the 'M2Catalyst Digital Divide Score' 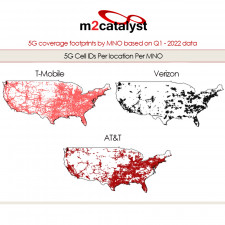 WorldPop provides the population density for every country down to grids smaller than one square kilometer. When overlaid by the hundreds of billions of network performance data points contributed by the Network Cell Info community of M2Catalyst, underserved communities were identified, i.e., those without access to mobile broadband (4G/5G) or even to any mobile signal whatsoever. This enables the M2Catalyst reports to focus on more than just network speed, determining where the world's population does not have mobile broadband (4G/5G) access, right down to the small communities in every country.

The U.S report revealed that there are more than 644,000 populated locations of one square kilometer in area within the U.S. that are further than three miles from the nearest detected 4G/5G mobile broadband cell site. This not only confirms the existence of the digital divide in the U.S. today, but also provides a roadmap for Mobile Network Operators (MNOs) to fill in the gaps in their networks.

The United States ranked 18th out of 33 countries according to the "M2Catalyst Digital Divide Score." Additionally, the U.S report revealed that 77% of mobile broadband cells are 4G, but with 5G growth rates five times that of 4G, the ratio is set to change rapidly.

The top three MNOs in the U.S market (T-Mobile, AT&T, and Verizon) all make continued investments in both bridging the digital divide and advancing the quality of connectivity through the addition of the all-important 5G services. However, M2Catalyst's analysis of the following data provides a clear picture of which MNO leads the way in the race to bridge the digital divide and where the biggest opportunity for each MNO exists:

The full findings from the report can be found here: https://www.m2catalyst.com/unitedstates-q1r-22.