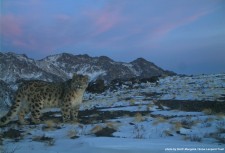 The Great Ikh Hural, Mongolia’s parliament, has approved a proposal to turn the Tost Mountains, a prime snow leopard habitat in the country’s South Gobi province, into a Nature Reserve, one of four categories of State Protected Areas under Mongolian law. Under this designation, only traditional economic activities such as livestock grazing that aren’t harmful to nature will be allowed, while mining, construction, and hunting will be prohibited.

The Snow Leopard Trust would like to express its gratitude and appreciation to the Mongolian parliament, and in particular to Members of Parliament Erdenchimeg Luvsan and Oyungerel Tsedevdamba, who led a Parliamentary delegation with 5 fellow members who championed the proposal.

We would like to congratulate the local government at Gurvantes and the provincial government of South Gobi – and most of all Tost’s local communities, who have championed the idea of protecting this important snow leopard habitat for many years.

One of the largest protected habitats in the world

“This is a huge step forward for the protection of the endangered snow leopard in this part of its range”, says Charu Mishra, the Snow Leopard Trust’s Science & Conservation Director. “This Nature Reserve will be a bridge between two existing Protected Areas, the Great Gobi and the Gobi Gurvansaikhan National Park. The resulting landscape will be one of the world’s largest continuous protected snow leopard habitats.”

Under Mongolian law, the government will now appoint a working group, consisting of members of several relevant government agencies and public sector partners, to work out the specifics of the new National Park, including its precise boundaries. The Government has 60 days to complete this task.

“Within the 8163 square kilometers that are being considered for the National Park, there are currently around 12 licenses for mining exploration, and 2 active mining sites”, says Bayarjargal Agvantseeren, the leader of Mongolia’s Snow Leopard Conservation Foundation and Director of SLT’s Mongolia Program.

As mining activities won’t be permitted within the park boundaries, the working group now has to come up with a solution for the land affected by mining licenses. The licenses can either be revoked, in which case the companies holding them would be compensated, or the licensed land be kept out of the National Park. To protect the ecological integrity of the area, it would be important to revoke licenses that fall inside the boundary.

Site of the most comprehensive snow leopard study to date

Tost is the site of the world’s most comprehensive long-term snow leopard research study, being conducted by the Snow Leopard Conservation Foundation, Snow Leopard Trust, and the Mongolian Academy of Sciences since 2008. The conservation organization Panthera was also a partner in the study until 2012.

In this study, scientists have so far tracked 20 snow leopards with GPS satellite collars, gaining unprecedented insights into the behavior and ecology of these cats, and monitoring wild snow leopard cubs in their dens for the first time ever.

Remote-sensor camera data collected over a span of five years has shown Tost’s snow leopard population to be stable and reproducing, with at least 12 adult cats using the area at any given time.

A win that was years in the making

Given the importance of this ecosystem both to the endangered snow leopard and the local pastoral community,the Snow Leopard Conservation Foundation and local people began making efforts for its protection in 2008. In 2010, the community achieved a major breakthrough, as both the provincial and central governments agreed to give Tost and Tosonbumba the status of a Local Protected Area. This offered some level of protection from further expansions of mining in the area, but could not guarantee the ecosystem’s long-term future.

Our team recognized this early on, and began working with the local community and leadership toward achieving State Protected Area status in 2012. Now, 4 years, this collective effort has paid off, and Tost should remain a safe haven for snow leopards.

Great news after a tragedy

The good news comes on the heels of a tragedy of immense magnitude: In 2015, we lost our friend and colleague Lkhagvasumberel “Sumbee” Tomorsukh, who dedicated his life to studying and protecting snow leopards and other wildlife of Tost. An investigation into his death is ongoing.

Sumbee’s dedication to the wildlife of Tost knew no boundaries. When water holes froze over during a harsh winter, he carried several hundred pounds of ice up the mountain, so the animals would have enough to drink.

“Sumbee lived for Tost and its snow leopards. If he were among us today, he’d be the happiest person on earth. The new Nature Reserve is a fitting tribute to this amazing young man”, says Bayarjargal Agvantseeren.

Snow Leopard Conservation Foundation is the Snow Leopard Trust’s partner organization based in Ulaanbaatar, Mongolia; working together on the conservation of the endangered snow leopard since 1998.

This major achievement, five years in the making, has benefited from the support of each and every donor. Such an enormous and sustained undertaking would not have been possible without our donors! Our biggest and heartiest thanks goes out to the over 2,000 Snow Leopard Trust donors around the globe. Thank you!

Thank you to the following for partnering with us to support Tost LPA and advocacy for Tost:

Thank you to the following for partnering with us on special conservation and research projects important to Tost: