Assets to be liquidated to pay judgment to 82-year-old widow, an order Terminix refuses to pay. 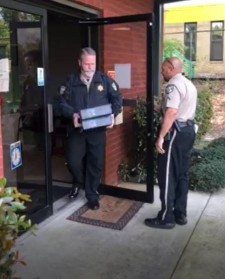 MOBILE, Ala., March 31, 2020 (Newswire.com) - EDITED: The following story has been edit to correct mistakes of fact.​ -​​​On Monday, the Mobile County Sheriff's office served a writ of execution, which allowed it to seize computer equipment, hand-held devices, and other hard drives as a consequence of Terminix refusing to pay a final and binding arbitration award.

As many in the Gulf Coast area know, Terminix has been under scrutiny for drastically raising its annual renewal premiums. According to Tom Campbell, founder of the Birmingham and Mobile based law firm, Campbell Law PC, “This time Terminix has gone too far in refusing to pay the final judgment from an arbitration to an 80-year-old widow from Mobile.”

According to Campbell, the Alabama Attorney General’s office has begun seeking information from Terminix and other sources regarding what is likely a violation of Alabama’s Deceptive Trade Practices Act. Campbell hopes Attorney General Marshall will not let Terminix abuse the tens of thousands of customers that the company abandoned: “My law firm has offered to help with these efforts in any way we can, provided that the relief sought makes whole every homeowner cheated by Terminix.”

Termite Tom urges homeowners to encourage their local District Attorney and the Attorney General to use the full power of the law to protect the citizens of Alabama. He says, “Our elected officials have the responsibility to hold this multibillion-dollar company accountable!”

Campbell Law gives permission for outlets to use embedded video at their discretion. Campbell is available for Zoom interviews: contact Jennifer Campbell Ellis (jencampbellellis@gmail or 205-447-8678). Campbell Law PC has handled cases against Terminix and other pest control companies across the U.S. for over 20 years. You can follow them on Facebook and connect via LinkedIn.