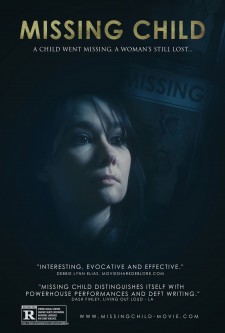 LOS ANGELES, September 11, 2017 (Newswire.com) - Missing Child, Director Luke Sabis’ critically-acclaimed indie thriller is now available for purchase on Amazon Direct, Blu-ray and DVD. Those who want to follow the story of Gia as she discovers she might be the “Missing Child,” listed in an age-progressed photo can now do so in high definition.

The independent thriller was written, acted in, directed and produced by Brooklyn-born Luke Sabis, who relied on his music background to write the score and soundtrack. Missing Child premiered at the Boston International Film Festival, where it picked up a Special Recognition Award for Directing. It went on to win Best Feature at Beyond the Beaten Path Film Festival, before racking up another win at the 2017 Idyllwild International Film Festival in California.

Sabis, who has been compared to Bennett Miller, Tim Robbins, and Christopher Nolan for his neo-noir style, reveals, "Making a truly independent film is like being a small business owner. When a budget is limited you have to have your hands in a lot of different areas in the production and post-production processes." He adds, "Indie films are the best place today to introduce original material with a different point of view."

Missing Child was well received by critics. Paula Mooney of the Examiner reported, “It’s a beautiful blend of sexuality as it meets spirituality that permeates the entire film.”

Sabis sets an example through Missing Child to Indie filmmakers looking to make a break, proving that anything is possible with the right about of dedication and persistence. Now viewers can enjoy his critically acclaimed creation through a high definition picture with full 5.1 Surround Sound audio on Amazon Direct and Blu-ray.

Luke Sabis is a filmmaker, composer, actor and director, known for his performance in Cleaver’s Destiny and directing and producing Missing Child and Ghost Tenant. He was also a member of rock band, The Take, in the 1990s. With several awards and festival appearances under his belt, including the Short Film Corner at the Cannes Film Festival for Ghost Tenant, Sabis is the Indie filmmaker to watch.